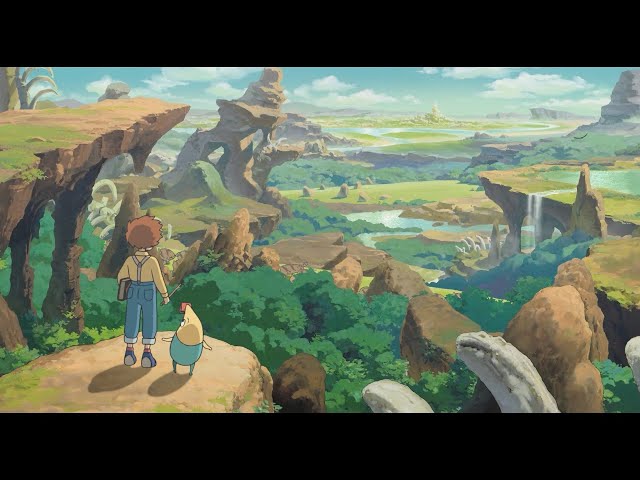 As this is a remaster, players of the original game will already know what to expect story-wise from Wrath of the White Witch. Feel free to take a look at our review of the PS3 version to help recap if needed though.

For newcomers to the series (like myself) however, the story of Wrath of the White Witch is rich in typical JRPG tropes, twists and turns, and does not disappoint. Following the experiences of our young hero, Oliver, the story goes from lighthearted and unfortunately tragic in Oliver’s world of Motorville, before transitioning a magical world with the help of his fairie friend Drippy. Oliver promptly assumes the mantel of a wizard in training, exploring what turns out to be a bizarro version of his own world. And of course, no JRPG would be complete without watching an underdog/secret savior of the whole world have evil doers attempt to thwart him every step of the way.

For better or worse, the gameplay of the remastered edition is identical to the original. The world and environments the player explores are rich with characters to interact with, with some unexpectedly hilarious side conversations occasionally if you take the time to talk to everyone. Side quests, or missions, are sprinkled about with enough frequency that it was quite easy for me to get distracted by completed random tasks for NPCs rather than focusing on the story, though the variety and clever writing of said missions and dialogues was sufficient to not make the experience feel tedious.

Just like the original version, the combat system of Ni No Kuni: Wrath of the White Witch Remastered can be hit or miss. The controls are a bit awkward or clumsy at times and just don’t seem to flow very well. While interesting as a game mechanic, switching between different characters and familiars during a battle can feel tedious until enough repetition has adequately drilled the process into your brain. This is not to say that combat is a total chore. Once more familiar with the system and access to more characters and familiars becomes available, the strategic elements can become an exciting dance of skill all to themselves, particularly during some of the more difficult boss battles.

As I have already stated, the remaster of Wrath of the White Witch is extremely true to the original. In fact, as the original PS3 game was technically an enhanced version of the 3DS game Ni No Kuni: Dominion of the Dark Djinn, this “remaster of a remaster” may be better described as an “enhancement of an enhancement.” With no story or gameplay elements differing for the PS3, improvements made in this version are essentially only graphical in nature. The Playstation 4 and PC releases of the remaster feature higher definition resolutions and much smoother framerates than the predecessor, with PS4 Pro owners benefiting from even better graphical enhancements. Sadly, the Nintendo Switch version of the Wrath of the White Witch, releasing on the same day as the remastered version, is simply a port of the original and does not feature any of the graphical enhancements. Thankfully, all new releases, Nintendo Switch edition included, feature all of the available DLC from the PS3 release.

brand
Ni No Kuni: Wrath of the White Witch Remastered | The Digital Fix