We have all experienced the agony of working a job we hate, the degrees of which may vary and the demoralising effect they have on us fluctuating, but at the core, we all know the sting of a job that we don’t want but need. Taking that fairly universal trauma and spinning it into a video game that people spend their precious time away from work playing is the unique challenge facing Mosaic, which comes to PS4, Xbox One, and Switch after a previous release on Windows and iOS. 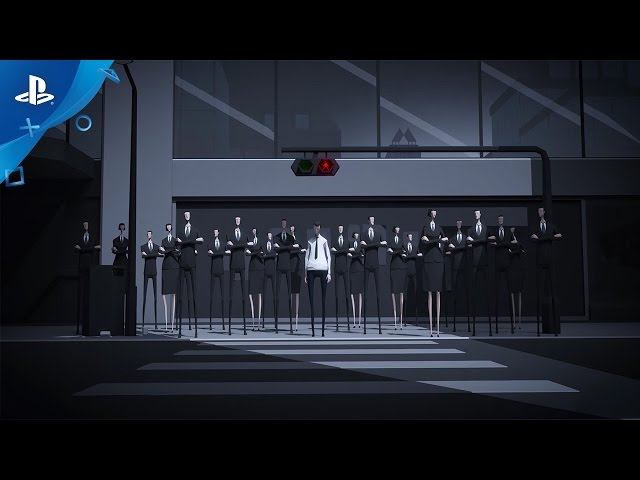 Mosaic is the latest title to herald from Krillbite Studios, the makers of the ambitious and well-received toddler-centric survival horror Among The Sleep, having previously been released for Steam and iOS, now released PS4, Nintendo Switch and Xbox One. Mosaic is every part as formally ambitious as its predecessor but struggles to find the same sense of urgency that made their breakout game so weirdly compelling.

Mosaic approaches gaming mechanics in the same way many indie titles do, they make you work it out for yourself. If you wanted a tutorial then you should have paid more for it, frankly. Having to feel out every button press, searching for contextual prompts to appear to let you know you are doing something right, striving to understand the very nature of the game you are playing can be an intriguing little mystery to unravel but once you get comfortable with everything going on around you, there really was not a great deal to discover. You move your character around his environment, you find the limited tasks given for each room, and then you move on. Each moment Tsing you closer and closer to your protagonist’s day job.

One rather effective little distraction comes in the form of your phone (who’s shocked by this?) where you quickly avoid the threatening texts from your employer to access a game called BlipBlop. The only thing you need to do in BlipBlop is hit a button, repeatedly, as fast as you can. The more you blip, the more blops you receive, which you can trade in for faster blipping abilities to rack up even higher blop counts even faster. It is weirdly addictive for such an asinine experience, although the mundanity is entirely the point, it still seduces you with a sense of fleeting accomplishment like any mobile games. Much like it’s real-world counterparts, BlipBlop throws bonuses at you and on a meta-level Mosaic throws trophies at you to encourage you to keep playing, despite the ultimately useless nature of the game.

Eventually, you have to tear yourself away from BlipBlop because you are an adult with adult responsibilities, and so begins the gruelling morning ritual of the resultant worker. Fix your hair, straighten your tie, brush your teeth. There is a pervading sense of unease, even brushing your teeth in the morning before work feels like it’s building to something terrible like some sinister entity is going to emerge in the mirror and cause you harm. But, no, the worst thing about brushing your teeth is that it brings you one step closer to leaving the door for work.

As you navigate the apartment complex it suggests something more like a hive than a community. The mailboxes that line the wall on the ground floor are too many to count, I never once remembered where my character’s mailbox was situated. Stages that cover the walk to work feature a procession of identical suited work drones, the message persists at every stage of the game

The ‘job’ itself is even more on-message, albeit in a more abstract form. You are tasked with creating and  ‘extractors’ and sending them to farm indistinct hexagonal spaces for ‘resources’ which build into a beehive of sorts. Much like with every other component of the game, you receive minimal instructions on how exactly to play these scenes, receiving only vague menacing messages from above to ‘feed the milestone’ and demands of ‘more!’

It is not immediately obvious how you complete this stage. The experience became demoralising and frustrating. By the time I worked out how to finish, I felt drained. I had done the job but I felt very little in the sense of reward, whether that feeling was by design or happenstance, the experience matched the thematic underpinnings of the rest of the game. Capitalism is a ravenous beast and it is never sated, it always needs to be fed, it’s not something you can really beat when you’re within it. It’ll take everything from you and leave very little left.

These parts of the game are by far the least interesting, although they continue to evolve new mechanics and challenges and largely remain thematically consistent with the more interesting narrative portions of the game.

The story-driven sections of the game are far more interesting, even if there is little in the way of challenge. Each day is broken up by curious tangents, such as a sequence where you take control of an iridescent butterfly as it travels through a dust hazed construction site. To divulge further on these scenes would do a disservice to the level of invention poured into the visual flourishes of Mosaic, but they are worth seeing whether they are gorgeous colourful visions or nightmarish ones.

Artistically, the game cannot be faulted as it offers compositions that are beautiful and memorable even in the most soul-crushing of environments, but there are significant issues on the technical side. There were noticeable performance issues on my regular PS4, despite the games fairly simple visuals. It held together for many of the most striking scene transitions but scenes like walking down a bustling street saw the framerate stagger considerably. The controls also feel very clunky, I had issues with responsiveness any my character would get stuck if I did not move a specific way, something I imagine isn’t an issue with the point and click system of the PC/iOS versions.  Additionally, I ran into several bugs including one that impeded my progress and required a game reset to get around.

Mosaic is unquestionably a great artistic accomplishment but as a game, it is difficult to recommend. People have a miserable enough time with their own 9 to 5 life, why would they want to part with their own money to experience someone else’s?