Developed by Rock Pocket Games and published by Funcom, Moons of Madness is a new title in the seemingly ever-expanding genre of Lovecraftian games. Rather than being based roughly in New England as most of H.P. Lovecraft’s tales, Moons of Madness drops the player into the terrifying unknown of the surface of Mars. Moons of Madness takes place within the same universe and Funcom’s Secret World Legends, drawing upon its already established lore. Having never played said game myself, I was relieved to hear from Funcom that being familiar with Secret World Legends would not be required to still have an enjoyable experience with Moons of Madness. 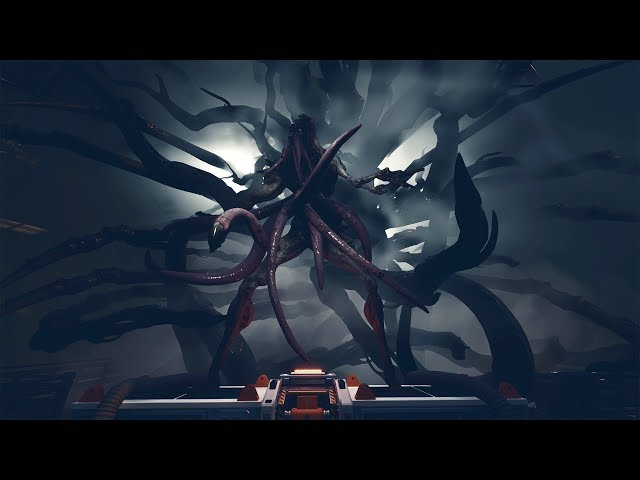 Moons of Madness starts off with the player, controlling Chief Engineer Shane Newehart of the Orochi Group, waking in Newehart’s personal quarters within Trailblazer Alpha station on the Martian surface. Upon leaving the room, it becomes obvious that things are not as they should be. Darkness overwhelms until discovering a flashlight pointing at a wall featuring odd symbols mysteriously scratched in red. Black, pulsating tendrils join forces with a toy spaceship, a terrifying birthday celebration, and similar strange elements to immediately plunge the player into a state of unease and intrigue. Before long, though, the mounting terror breaks and we realize that it was all a dream, waking again in Newehart’s personal quarters.

Back to his waking life, gameplay progresses with Newehart being tasked by other Trailblazer Alpha inhabitants with riding out to another portion of the station to remedy mysterious power outages, satellite misalignment, and any other engineer-type requirements. It should be noted that as we progress through the game we don’t see anyone else, at least not as they should be (insert spooky music here for added mystery…but no spoilers here friend). Instead, communication consists of radio contact between various members of the team, though much of the interactions are with Newehart’s chum, Declan.

Interacting with the environment, other than opening doors and pushing buttons of course, is accomplished through a wrist gadget called a biogage. It is quite important to get used to how to use the biogage, as I found it my most commonly pressed button after a while. This handy device is able to give detailed information about certain objects by scanning them, and even to connect with certain objects from a distance for interaction purposes. More often than not, though, the most useful benefit of the biogage is to offer a bit of direction in the form of a glowing yellow line for the next objective. Even though a fair bit of moving around the station is mostly linear in nature, given the fact that you spend much of your time anxiously glancing around and avoiding creepiness, it is easy to forget where to go next.

Once Newehart starts looking into the mysterious outages and difficulties being experienced by the station, the sinister undertones of his game-starting nightmare begin to take shape again. This ranged from simple oddities such as things not being where they were meant to be, to strangely stacked rocks, all the way to what Newehart perceives as hallucinations. Unfortunately for our poor engineer protagonist, though, he soon discovers that much more is actually afoot rather than just in his mind. It would not be a proper Lovecraftian outing without crazy, faceless, many-tentacled monstrosities stalking after you, now would it?

Of course, as a fan of H.P. Lovecraft’s writings, I can attest that much of what intrigues and terrifies readers (or players in this case) the most is what is imagined rather than what is actually seen or experienced. Rock Pocket Games did a masterful job of interweaving eldritch sounds and ominous environments to truly immerse the player into the madness being experienced by Newehart. In fact, these moments not involving the actual otherworldly creatures were typically the most gripping.

Unfortunately, there were also certain aspects of the game that unceremoniously jolted me out of said immersion. Intermixed with the cautious exploration and manic running from grotesque horrors, Moons of Madness includes puzzle-based elements. This inclusion is likely to make the player feel like they are more a part of the action rather than just running and watching drama unfold. However, the frequency of these puzzles had the potential at times to distract from the chaos around, particularly when the chaos politely waits while you beat your head against the solving process itself. I do not feel like this was a game-breaking issue though. Sometimes I even welcomed these somewhat peaceful respites from terror, and thankfully the variety of puzzles to be solved were substantial enough to never feel repetitive.

Sadly, the only true distraction I experienced in my time with Moons of Madness came from Shane Newehart himself. More specifically, his voice. The voice acting as a whole was pretty solid. I don’t know, it is hard to describe what went wrong with the voice acting from time to time I guess, but something just went wrong. Whether this was an editing issue or the voice actors were not given proper information about when and how some clips would be used I’m not sure, but some of it just felt out of place. Sometimes the emotions of the moment did not fit the emotions in the voice clip, other times the random exclamations of terror and surprise were less random and more repetitive. Most times the voice acting was perfect, accurately portraying the complex set of emotions of the characters. Unfortunately, this mostly positive aspect made the inconsistent times stand out even more.

I could go on and on about the story experienced here, but that would not be fair to the readers. Moons of Madness is a story that has to be experienced first hand to truly appreciate what it is. But if you do, just try not to scream too loudly. You don’t want to wake the dreamers, do you?