Fairy Tail, developed by GUST Studios and published by Koei Tecmo is a video game tie-in based on the hugely popular anime and manga series of the same name created by Hiro Mashima. This prolific series consists of 63 manga volumes and a whopping 328 anime episodes, yet this is surprisingly the first non-handheld console release and first ever game release in the west. Let us take a closer look at how this beloved franchise’s much anticipated digital adaptation handled the pressure. 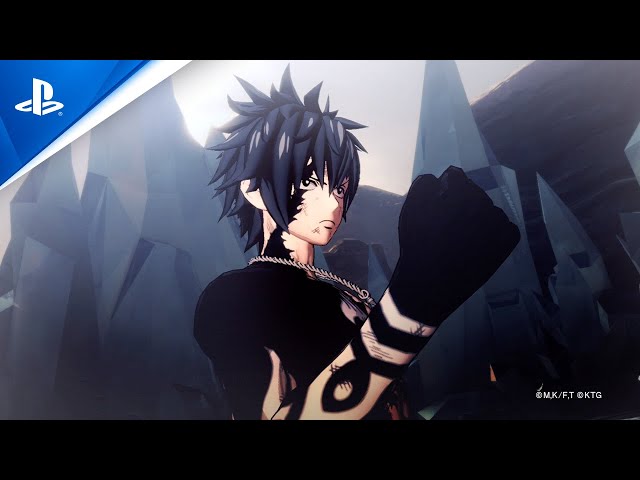 Fairy Tail‘s story begins with the guild searching for the grave of one of their former guild masters to become the illustrious and much sought after S-Class rank. They soon find themselves confronted by Hades, another former guild master, as he engages in a nefarious plot to awaken Acnologia, the “Black Dragon of the Apocalypse.” All of their craziness prompts Zaref to join the fray, before Acnologia destroys Tenrou island. Luckily, the members of Fairy Tail are saved at the expense of being put into a deep sleep for seven years. Fairy Tail thus begins with the guild returning to their home of Magnolia Town, Fiore, tasked with rebuilding their good name and the guild house itself.

Feel lost yet? Not surprising given the number of story elements thrown at the player from the very start. The reason for this mass confusion initially is that this game begins its story with the Tenrou Island arc of the series which exists nearly 100 episodes into the anime and the 200th chapter of the manga. For veteran fans of the series, this is a welcome beginning due to it being an exciting, intense time in the show. Said veteran fans already know who all these characters are, why they are on the island, and how important the events that unfold are. Newcomers? Just try to keep up if you can because there is absolutely no story hand-holding here. There are limited numbers of character story missions here and there that give bits of insight, though still insufficient to truly immerse Fairy Tail initiates in the world around them.

To a certain extent, I can understand this choice given the fact that the earlier games on the PSP cover events leading up to this arc. However, given the fact that these were never released outside of Japan, many players will have never had access to these entries, again making this first console release alienating to those not familiar with the anime or manga.

If you can get into the story, whether because you are familiar or just go along with it, gameplay for Fairy Tail begins with the guild members realizing they are broke, unknown, and stuck with a run down guild building. Having formally been the top guild in all of Fiore, the first (and main) goal of the game is to rebuild your fame, fortune, and good name as a guild. This can be accomplished through story progression, job completion, and guild upgrading. Sadly, the only variety that truly exists with these options is the story progression itself. Jobs are initially interesting, including tasks such as item gathering and beast hunting, and come in the form of the job board in your base or accepting community service tasks from NPCs. That is about it though. Hopefully you enjoy gathering the same items and battling the same beasts. The developers did try to include a bit of that Fairy Tail humor that fans enjoy, at least, by adding words like “…again” on the job descriptions, though this does not take away from the repetitiveness.

The battle system in Fairy Tail is classic JRPG-styled turn-based system. Options given to all characters include attack, defend, items, and magic, though all of these are essentially useless besides the magic command. I believe in my entire play through, I only used the attack command once, and only so that I could claim I did so. Instead, battles quickly became choose magic, choose the most powerful magic, rinse and repeat. I did enjoy the elemental strengths and weaknesses and shaped attacks, though this still boiled down to just choosing whichever one said “weak” and spam that until the enemy died. The only variety tossed into the battles included magic chains and awakening mechanics that changed from character to character.

The other mechanic that plays a large part in Fairy Tail is the relationships/bonds between characters. While every character earns a bit of XP whether in your party or not, only characters that participate in jobs and battles increase their relationship rankings with one another. This is advantageous to the player due to stronger bonds resulting in more impressive magic chains and abilities/stats available to those characters. However, there is truly little motivation to do so with all 16 characters (plus 4 DLC characters). After a bit of time I fell into the habit of choosing my favorite 3 characters (or 4 when the team expanded) and only using them. This is not inherently bad though. The characters included are perfect, particularly for myself as a Fairy Tail fan, as my favorite anime characters were the ones I chose to focus on.

Speaking of characters, their designs are spot on with the anime and manga, even to the point that the actual voice actors from the anime voice their respective game characters. If you are a fan of Fairy Tail already this will be no surprise to you, but a newcomer should be warned that you better be OK with…ahem…curves. The male characters are manly, muscular, and undeniably male. The female characters are stereotypical “anime babes,” complete with low-cut, often voluptuous tops and nearly non-existent bottoms. There are even multiple excuses for the guild to go training at the beach in their bikinis and swim trunks. This overtly stereotypical nature is just par for the course for Fairy Tail and its tongue-in-cheek comedy and universe.

Other than anatomical excesses, the graphics of Fairy Tail are typically spectacular. Characters, enemies, and locales are presented in a beautiful cel-shaded style that perfectly portrays the feelings of being in the world of Fiore. However, when outside of Magnolia Town and exploring the other world locations where jobs and story progression typically take place, the world sadly seems flat, repetitive, and just unfinished. This, combined with the static and stiff battles, immediately breaks immersion that otherwise is superb.