You are a young painter, travelling across the sea to the land of Eastshade, to fulfil your dying mother’s wish to paint the land she loved and longed to see one more time. This could be the premise of any number of novels going down a storm at your nearest book group but all of the inhabitants of Eastshade are anthropomorphised animals. So maybe just the book groups run by furries then. 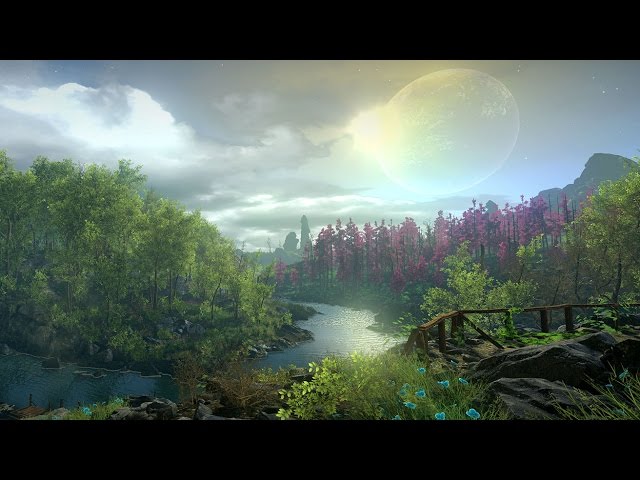 There is no lore provided to explain why every character is an animal, or why those animals have pets that look like normal animals, it does not expect you to overthink such things. Perhaps the choice to make every character an animal was a matter of maintaining the wholesome feel of this new world. The real world has made us sceptical or distrusting of people, in games such as Skyrim or a Fallout we are on edge when interacting with other characters, preparing for possible conflict. But everyone loves animals, we look at an animal and we see a simple purity. That is part of Eastshade’s allure, it feels calm and peaceful.

After an initial flash of high drama, when your ship collides with a reef, you have washed ashore with nothing but your easel and paints remaining from your belongings. From here on the game eases itself into something far calmer and purer than the disaster strewn opening scene would suggest. It is down to you to explore the land of Eastshade and work your way towards making your dearly departed mother proud.

It is a simple premise for a simple game. Functionally, the game looks and feels a lot like Skyrim, but with a more updated visual polish, a more streamlined control scheme and a tidier UI. No new ground is being broken but familiar ground is being trodden with the utmost care. The locations are stunningly realised, with a gorgeously calming look to the skybox that hangs above you at all times and the light vibrantly shining through the lush greenery all around you. Every scene bursts with beautiful, natural feeling colour. The ambient sounds of lapping waves and seagulls overhead fill the air. The land of Eastshade immediately feels safe. Everything is so beautifully and vividly realised that you can forgive a relatively small drawing distance and the occasional moment of lag as textures load in, the complete picture is always worth a brief wait.

The denizens of this world are fully voiced and the actors do a solid job across the board, you will not find any repeat voices like you will in the more unwieldy Elder Scrolls style games, there are enough characters to ensure every voice feels unique. In true first-person RPG style, you are mute and communicate through dialogue options. You collect key topics that can be broached with every character you meet or you can stick to the character-specific options. Early in the game, I interacted with a budding young artist, and instead of brushing her off to move along what I assumed would be the main story, I offered to show her how to make her own canvas. This was how the game taught me a crucial component of the gameplay, it was handled through character and felt organic rather than as a tacked-on tutorial that killed immersion. Once you have a canvas, you can make use of Eastshade’s painting mechanic. Select your canvas, aim the camera at what you want to paint, adjust the frame where appropriate, and the game will render a beautiful painterly recreation of what you selected. It is a simple but oddly rewarding experience, seeing the joy your work brings others. Many of your side quests involve doing commissions for the strangers you meet, with the occasional fetch and deliver quest or dialogue-driven storyline to bring some variety to things.

Eastshade is a gentle, soothing thing. A story of low dramatic stakes but tender emotional overtones, it does not ask you to slay great beasts or save the world, it simply asks you to explore and experience the world around you. Engage with the sights and sounds, appreciate what surrounds you, and create memories. Eastshade is, simply put, a game about living.