A fear of difficulty could discourage you from playing some of the best games of all time. Learning to play can be a big commitment and in the end it may never pay off. But when a concept is simple and the penalties for failure are so slight, we can approach these challenges with a feeling of hope no matter how skilled we are as players. 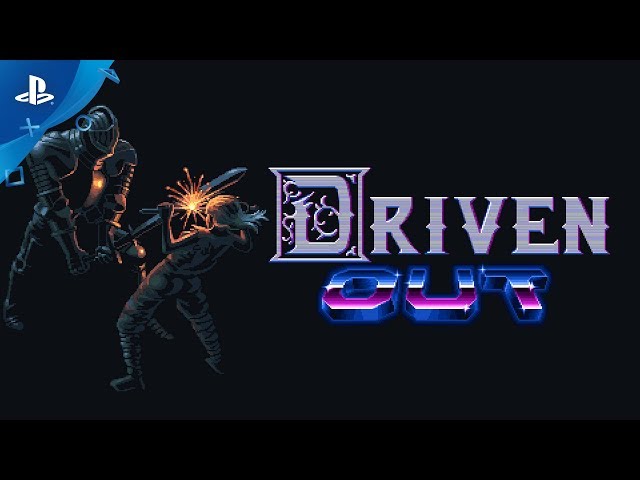 Robotron perfected this idea for the arcades by making every second of survival feel like a victory. Super Meat Boy likewise had us hooked to its brutal platforming, serving up a series of bite-sized stages to feed our desire for “one more go”.

Replacing the loose action of a classic hack and slash game with meaningful, deliberate combat, Driven Out is able to deliver a similar experience of short, compulsive challenges, as you take on a gauntlet of enemies with nothing but a sword in your hand and the power of a strange metal object that fell from the sky. Giving you the ability to place a limited number of checkpoints, the Witchcraft Contraption is at once the central intrigue of the game’s story and a crutch to help you manage its savage difficulty.

Leading you through a seamless world of ransacked castles and mysterious woods, this 2D adventure eventually arrives at a destination located somewhere in the twilight districts of the imagination. Though it’s old-school level of difficulty and entirely skill-based combat are made more approachable by frequent saving, can Driven Out deliver a tangible sense of progression that makes your efforts ultimately feel worthwhile?

The combat in Driven Out is shaped by a three-position attacking and blocking system. High, mid and low attacks are executed using face buttons. Enemy attacks are also blocked from above, head-on and below by combining the same button presses with a trigger. Simplicity in its purest form, Driven Out delivers a system of control that takes little time to learn but plenty to master.

A sense of style when it comes to the sword-swinging will be instantly recognisable to fans of cinematic platformers from the early 90s, especially Prince of Persia. Defined by the liquid movements of their characters, the fluidity and realism of animation often took precedence over the feeling of accurate control in games like Flashback and Another World. Driven Out does a stellar job of balancing this expressive style with the precision of control required to stand up to the challenge it presents. By preventing you from cancelling attacks once their animations start to play out on screen, it forces you to time your movements carefully. This design choice at once provides a captivating visual effect and is an indispensable facet of the game’s unique action that is pitched to the perfect speed.

This balancing act does come at the expense of a few frames of animation that are lost as the heroine snaps back into a fighting stance immediately after swinging her sword. But like the strange way that she walks, and the surreal touches to the artwork, this jerkiness kind of adds to the game’s slanted charm. We should embrace the weirder strokes in Driven Out’s design, as these often produce some of the game’s most endearing moments.

Though the controls are straightforward, killing really is a conundrum in Driven Out. Observing the enemy’s attack patterns and searching for potential weaknesses are the key to overcoming each encounter. Bosses usually take the form of bigger sprites, and these tend to broadcast their intentions in a clearer way than their smaller counterparts, with distinct animations that allow you to anticipate their moves and react accordingly. The demon wolf, for example, raises its paw before swiping from above and draws back its head with gnashing teeth before attacking head-on. Recognisable and fun to resist, these patterns create moments of gratification that are consistent when it comes to the bigger enemies.

Though this example is of an early and relatively simple boss, it’s not long before the game starts to throw curveballs to subvert your expectations, and it’s here where the lines start to blur between what is deliberate, instinctive and a result of blind luck. A huge gold-plated ape, for example, raises its body before punching downwards to hit you in the chest, tricking your mind into thinking the attack will come from above. But the sprite is massive and the two animations are different enough to make it an interesting test of perception, one which I overcame and felt quite good about.

Elsewhere, a shaman makes orbs materialise at either side of you. Defending yourself from the projectiles involves precision and timing as you turn and block, and this again is satisfying because you’re able to perceive the height of each floating orb.

When it does become frustrating, however, is when a smaller sprite has the potential to attack from either side. By the time you have recognised the direction in which you need to face, their animations are too short to give you chance to defend effectively. When enemies gang up at either side, they’re likely to toss your body between themselves until the game is over. On a rare occasion, placing a checkpoint before you enter a battle can sometimes see you resurrected in an awkward spot, as multiple enemies overlap and attack you at the same time.  The experience will differ from player to player, and it was only on these rare occasions where it felt as though the difficulty was stretched beyond the means provided to you, transitioning briefly into the realm of the unfair. Since the game saves after every boss, as well as at the numerous checkpoints created by yourself, the situation never becomes impossible and the all-important hope that you started with still burns by the end.

By carefully timing defensive moves, an eruption of blue steel illuminates the screen as you parry the enemy’s attack, often stunning them and revealing an opportunity to strike. It’s in these flashes of brilliance that Driven Out is able to reward you for playing well. You may not have won the battle yet, but the sparks that fly from your sword are fireworks and this delivers a split-second of gaming perfection. I only wished that this feeling could have been implemented more consistently at the end of each battle.

With greater excess in the sound design and a touch of polish in the feel of contact between sword and body, the victories may have felt less hollow. Deflecting lasers towards the enemy is fun, but when its death occurs off-screen there really needs to be some indication of victory to make it feel worthwhile. At other times, I felt like I was hacking away at a piece of dead wood. As the game’s concept is so simple, the spotlight really shines on these subtle interactions and draws attention to their importance in driving home a feeling of entertainment that the game often seems to want to withhold.

Nevertheless, Driven Out sticks to its guns (or swords) with action almost entirely based on your skill, and the combat is easily tight enough to carry this off. Rather than offering up a superficial system of progression, experience or perks that we are typically showered with in every other game under the sun, the tools you are given at the start are those you will finish it with, and it’s up to you to get better. Since every encounter is so difficult, your improvement isn’t always tangible until you start a new playthrough, then suddenly you’re able to hack your way to the end in no time at all.

Instead, you’re rewarded on your journey with the soft touches that make the game shine: well-designed bosses and evocative visual storytelling. While there’s no denying that the game revels in the repetition of your death sequence, somehow it motivates you to have one more go and sucks you into a zone where time doesn’t exist.

brand
Driven Out | The Digital Fix