A disease has turned everyone into monsters and only pretty young women and creepy looking men have survived. Donning your special superhero outfit of a school uniform for some reason, your job is to fight off the monsters, save the other pretty young women and help everyone get back to school. I am being glib but that is essentially the gist of Dead or School, those are the two options available to humanity. 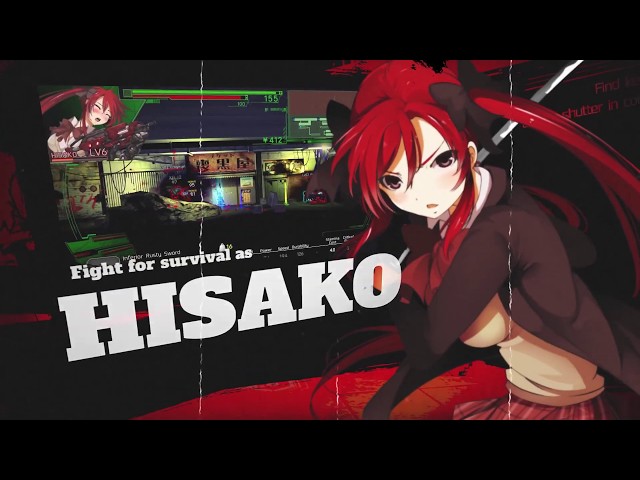 Dead or School is a game of two halves, one half I am not remotely comfortable with reviewing as I am not the target demographic. Every major character is some variation of a busty schoolgirl and when your character takes significant damage there is a clumsy animation of the beats ripping her clothes up. It is one of those types of games. If that is your thing, and I am not here to judge, then you should be ok here. Cut scenes either play out as static images manipulated to appear in motion or like the dialogue in those visual novel/girlfriend simulator; it may not be for me, and none of it is actually good, but it there is undeniably an audience for this sort of presentation.

So, kinks aside, what about the game?

Do not expect an answer to that immediately as the cut scenes seem to go on forever, even after a preliminary level one intro shot you are thrust back into more cut scenes, where the girls have tellingly had more attention put into their design than the monsters. Even spamming the skip button to speed through dialogue seemed to take forever. The game even has a lengthy dialogue exchange to explain the concept of save points to the player. To say this game is overwritten would be like saying Infinite Jest is “a bit wordy.”

After all that, you get to a loading screen that is far longer than the quality of the game’s graphics would suggest. The game looks appalling. I am all for a retro aesthetic but there are certain eras of gaming where that style can still play today, largely the 8-bit and 16-bit generations. Dead or School looks and feels like it came out of the PlayStation era, that awkward transitional phase between pristine 2D graphics and more polished 3D graphics. Outside of a handful of titles, this era was defined by bowling shoe ugly graphics and clunky gameplay. Even the greats of that era have shown their age in ways games on the NES, SNES or, on the other side, the PS2 have not.

Dead or School is a side-scrolling action game with a faint Metroidvania vibe, making you search around small map areas for new allies and upgrades to help you access new areas. I say “faint” because it’s the most asinine of challenges, you cannot get through one area so you run in the opposite direction until you hit a dead-end where you find the thing you need to get through the other side of the map.

The sense of exploration is severely limited and this might be acceptable if the combat was worth the time. It is all very basic hack and slash stuff unless you opt for your gun where you use the right thumbstick to aim. The sword seems to be the best weapon to use as enemies move too fast and get too close for gunplay to be any use outside of hitting the occasional flying monster, but even those get close enough to take a hit from your sword. The tougher, larger creatures encountered require your ranged weapons to dent their health bar but they are prone to move in for close combat and do just as much damage to you as you do to them. There is not enough versatility in the combat system to all for smart, tactical combat, it feels more like a war of attrition to see who dies first.

The best way to weigh things in your favour is through the RPG systems, upgrading your gear to inflict more damage. The early monsters are easily disposed of but there is a sharp difficulty spike as the enemies rank up, which necessitates a lot of upgrading to keep up, but the gameplay simply is not good enough to warrant the effort.

If you enjoy the fetishistic style of Dead or School, there are surely better places to scratch that particular itch, and if you like this style of game there are absolutely more polished, more rewarding games out there to play. Dead or School feels like a throwback to a time in gaming that deserves to be looked back on with reverence but rarely revisited.