Read out review of Darius Cozmic Collection Arcade on the PlayStation 4. A nostalgic trip back to classic arcade shoot ’em ups of the past. 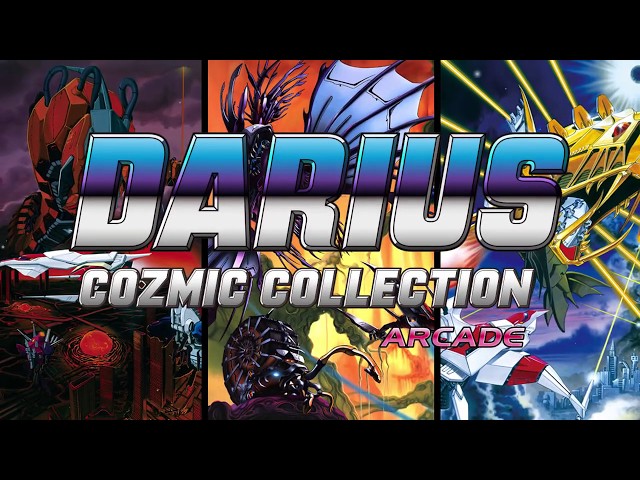 Anyone, who is like me and old enough to remember the arcade shoot ’em ups of the 1980s will have heard of Darius. Developed by the legendary TAITO Corporation, the Darius titles were pioneers of side-scrolling shoot ’em up arcade games. You know that beautiful classic gameplay; scroll left, right, up or down and blow the living hell out of anything that moves. Using outlandish weapons that could sometimes fill the screen with bright projectiles.

Either I am getting old in my years or I was much better at these games in my youth. When I booted up the first Darius game in this great collection I was shocked about how difficult it was. I got obliterated over and over again until, after a small adjustment period and some hard rewiring of my hand muscles, I got my reflexes back. I was then happily blasting those pesky fish bosses into oblivion.

Anyone who has played a classic shoot ’em up knows what to expect. Move through each stage, kill enemies, collect power-ups and defeat massive bosses. What made Darius special, in my opinion anyway, was the branching paths you could take after each boss. The game’s levels branch off each other meaning you can take different routes each time you play. Each level looking and playing differently and containing different enemies to test your skills against.

It’s the power-ups in this game that can make or break your run. As you kill enemies they drop shield emblems that increase your firepower, give you a protective shield or even upgrade your bombs. As you keep collecting them your damage output goes up exponentially. The problem with that is that if you die your damage drops back quite significantly and it can make it feel like you are playing catchup. It may sound obvious but the key to beating Darius games is to not get hit and accumulate a massive arsenal of weaponry.

What I love about this collection is how the sights and sounds take me back to my youth. The brilliantly designed stages, the colourful bosses and the amazing soundtrack all drag me back to arcades and my old classic consoles I had as a boy. The music specifically, is superb. Fast crunchy chiptunes really propel you through each stage and fill you with adrenaline as you fight through waves of pixel-based foes.

As well as having a nice selection of titles, this package contains a plethora of options and tweaks you can make to the controls and the gameplay. Full button remapping, turbo configuration and various screen options really mean you can adjust the game to your liking. You can even turn on scanlines to really hammer home that classic arcade feeling.

Another feature which helped me a lot early on was the quick load and quick save. I thought each game got easier and better to play as they got more recent in release date. The first Darius is by far the hardest and the later games much easier. The quick save and load helped massively with some levels and bosses in the first Darius.

Local multiplayer is included with all titles and if you have a significant other to save the galaxy with, it is a lot of fun. They say a problem shared is a problem halved and that certainly is the case with these games. There are the usual scoreboards to climb and online leaderboards can only be entered if you do not use the quick save and load, which is very wise. Its good for learning but scoreboard scores should be left to the pure unaltered gameplay runs.