A storytelling triumph, check out our full review of Crossing Souls

Every so often comes a game with a story that is steeped in nostalgia. A game that whether through it’s visuals, gameplay or references harks back go the early days of gaming or the general pop culture of yesteryear. These games can sometimes but lacking in all but the references they make. Crossing Souls is not one of that lacks anything, everything about the game is incredible and the journey it takes is something truly special that the team at Fourattic should be genuinely proud of.

The story kicks off in 1986 California with Chris needing to find his little brother Kevin. On his way to the tree house to meet him he picks up his friends. Matt, the nerdy tech kid, Big Joe, the bruiser and Charlie who as well as being a badass with a skipping rope is also the girl of the group. So far so eighties right? When they meet up they find a mysterious pink gem that lets them two different realms and thus begins their adventure.

The story feels very much like an 80s adventure film, think The Goonies and you have a good grasp on the general plot points you start with. However, along with the tropes comes a genuinely fantastic, and at times harrowing, story that pits the group against forces much larger than them. The game is somehow more realistic despite it’s story, at least in terms of consequences. This keeps the story enthralling as opposed to a side note to the gameplay.

The game is isometric for the most part with combat being a mix of attacking, dodging and using items as you barrel your way through each encounter. Each character has their own attacks and special abilities and you will need every single one of them throughout the game to solve puzzles and win some legitimately challenging boss fights. Each puzzle is clever and uses a combination of the characters and abilities at your disposal to overcome, this means that while you may favour a character in combat, you will definitely be using all five of them to make it through the game.

Something else that is impressive about how the game plays is the difficulty. There are no spikes as such but the game as a whole will punish you if you don’t take it seriously. Failing to utilise the various skills at your disposal is tantamount to failing straight away. The dodge in particular is well worth mastering in order to survive through each portion.

This is equally true in some of the more challenging platforming sections where not only do you need to remember which character can do what, but you have to do so while under pressure and changing characters in between jumps becomes incredibly important. This is a reflection on the games in the era that this one is based, they were punishing but beatable, the commitment to making this a product of an era in which it was not made is amazing.

The sound design fits the game perfectly, with the music echoing so much from the era that it feels as if it was composed then. Along with that you have cartoon cutscenes  peppered with VHS effects to make them feel authentic as well. The combination of all these little touches gives the game a lot of heart and it wears it well.

As well as the puzzles and fights you occasionally stumble into minigames which hark back to the 32 bit era of gaming with an inspiring amount of detail. Whether simple button mashing or shoot em up inspired chases you will find echoes of lots of different styles here. One in particular, a Battletoads inspired getaway is hard as nails but ends just in time to stop the player from losing hope.

Everything in this game is infused with an attention to detail and a love that really shines through at all times. Ultimately games like this are rare because nostalgia can so easily be a crutch. Instead in Crossing Souls nostalgia is an ever present compliment to the game itself and it meshes perfectly with every single aspect on display. This game is a must play and any games that are throwbacks in the future need to take notes. 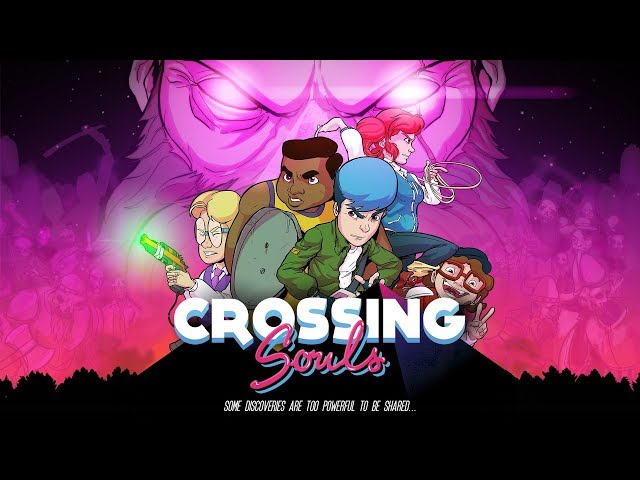