The Book of Books has been stolen and the literary multiverse has been thrown into chaos, the only way to restore order is for a ragtag group of literary icons to travel between worlds and retrieve the stolen tome. 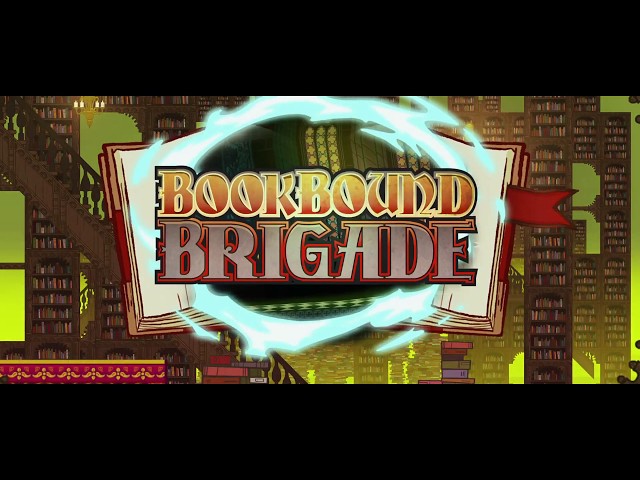 This is the fairly straight forward premise for Bookbound Brigade, a platform adventure game which brings together characters such as King Arthur, Count Dracula, Dorothy Gale, Robin Hood, Sun Wukong and more to explore spooky forests and spookier castles.

The core concept is a solid one and it is played with tongue in cheek, with a cartoon art style and a heavy reliance on jokes. Humour is, of course, entirely subjective but I found Bookbound Brigade’s sense of humour quite forced. I can see what they were aiming for, there’s a strong sense that they want this to be Pythonesque but the jokes are juvenile in the most basic sense, with none of the wit or subversion of a Holy Grail or Life of Brian, and the lines do not feel authentic to the characters saying them. For example: King Arthur feels no different to Dracula. There is a rich vein of comedy ready to be mined just playing off these wildly different icons and archetypes against each other but instead everything hinges on cheap one-liners. Joan of Arc is constantly on the receiving end of some truly lazy jokes about fire. None of this works and the alleged sense of humour is one of Bookbound Brigade’s unique selling points, because the actual gameplay is pretty boilerplate Metroidvania.

Metroidvania stems from the classic Metroid and Castlevania games, where your character is presented with a vast map where certain areas are initially out of reach, so they must explore the map in order to unlock new powers or means to access these hitherto unreachable areas. A good Metroidvania game should never feel like a chore, every new enhancement should feel like an achievement and every new discovery should spur you on to discover even more. Bookbound Brigade is neither a particularly good Metroidvania nor is it a dreadful one, and that is perhaps the most frustrating aspect of the game.

Bookbound Brigade tries to present itself as a new spin on the genre, as your squad of characters move in a huddle, and to access more of the maps you have to unlock new powers for each individual character as well as learn unique huddle formations to access new areas. The multi-character huddle gimmick seems new at face value but much like everything else in the game, it is just a fancy lick of paint over things the genre has been doing since its inception; teaching your brigade to walk single file is really no different to Metroid’s Samus turning into a ball to navigate narrow passages, it is simply a more convoluted example of that.

Worse yet, the huddle gimmick hinders the combat to a maddening degree as each member of the huddle hits in turns, so with your initial formation, you will miss two out of five attacks as none of the early enemies you encounter are tall enough to be hit by the top two characters.

The presentation is unquestionably the strongest part of the game. The art style feels unique, the way they visualise travelling between levels is novel and makes sense within the context of the story, but the actual level design itself is fairly uninspired, far from the heights of the genre. Load times also became a little frustrating as the game is not visually demanding for a current-gen title, nor is it a large game, so the time spent shifting between levels cuts into the game’s sense of momentum.

If you are a diehard Metroidvania fan in dire need of a new entry in the genre, there is enough to enjoy with Bookbound Brigade as it handles most of the classic elements competently, bizarre combat aside, but it offers nothing new that might persuade newcomers or any lapsed fans who grew tired of that style of game.