Blacksad: Under the skin, developed by Pendula Studios and published by Microïds, is a story-driven detective game. Genre-wise, Blacksad is an odd mixture of film noir and hardboiled detective stories, with a not quite point and click but still point and click play style. 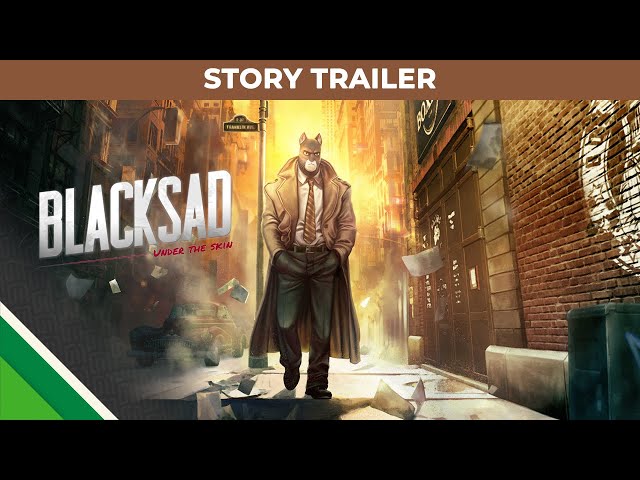 As the title suggests, the player controls John Blacksad, a feline private detective. The story starts out with Blacksad being confronted by the husband of a client, a rhino who was photographed by Blacksad cheating on his wife with a fox/cat person. It immediately becomes apparent that choices matter. Depending on how you respond to conversation cues, different messages are displayed at the top of the screen such as a character has learned they can trust you, you disappointed a character, and so on. Following the rhino encounter, Blacksad is given a new case which serves as the impetus for the remainder of the game.

Without giving away too much of the story, Blacksad is informed that the owner of a local boxing gym, Joe Dunn, was found hanged above the ring of his gym. Of course, as this is a detective game, there is obviously more to this case than simply a dead gym owner. The prized fighter of the gym, Bobby Yale, has gone missing right before the championship fight, which is actually what Blacksad has been hired to investigate. Death, intrigue, secret societies, and racial discrimination abound moving forward.

While not making any substantially inventive leaps, the story of Blacksad: Under the Skin was an engaging one that made me not want to stop playing. Game mechanic wise, however, this was essentially a point-and-click adventure from a non-point-and-click third-person perspective. John Blacksad would wander around until an interesting bit of evidence is found, even when said evidence is not interesting at all. Many times I thought that I may have stumbled upon a key bit of information, only to have to sit and wait while Blacksad slowly read a sign on the wall. Speaking of slowly, a frustration I experienced during my playthrough was Blacksad’s barely walking at a molasses-like speed. I only hope that his clients were not paying him by the hour, because they got majorly taken if so!

Intermixed with the investigatory wanderings, Blacksad finds most of his important evidence through interacting with the supporting characters in the story. As said previously, choices matter to a certain degree though a wrong answer will not necessarily ruin the game. Interactions sometimes also include QTEs, or quick time events, in order to spice things up. These can range from hitting someone with a typewriter to getting a gun, with deadly consequences being had for delayed responses. Finally, as Blacksad is a cat after all, there are times when he is able to use his cat senses to glean additional information that would otherwise have been overlooked.

Unfortunately, as much as I enjoyed the characters and story of Blacksad: Under the Skin, the technical difficulties were so abundant that it was hard to get through. Clearly the most time was spent on the modeling of Blacksad himself, as the quality of other characters just did not seem up to par. Very often they would engage in odd movements or facial expressions that did not fit the situation, along with mouths being poorly synced with the otherwise excellent voice acting. Other graphical glitches were prominent as well, such as Blacksad going to use his lockpicking kit and his hand being quite far from the lock itself. The worst technical difficulty, though, was a nearly game-breaking one. At one point Blacksad appeared to enter a building as evidenced by the door opening and closing, only for his character model to be completely absent. No button triggers were available, movements were minimal, and then several minutes later the scene magically shifted to Blacksad walking down a street. I initially assumed this was a one time error, though upon reloading the glitch persisted.

brand
Blacksad: Under the Skin | The Digital Fix