I wasn’t initially sure as to how I would word my initial concerns with Actual Sunlight, developer WZOGI’s most recent title to be ported to the Nintendo Switch. Apprehensive to begin my journey with Evan Winter, an “overweight, lonely and severely depressed young professional” according to the official website, I worried about how mental health would be presented and, more importantly, whether it would be a gimmick, shoehorned in to appeal to those that crave the lesser-used themes within modern gaming. With titles such as Hellblade: Senua’s Sacrifice masterfully showcasing the subtle-yet-impactful implementation of a mental health-orientated game and, arguably, being the marque game for such a message, I’m pleased to say that this re-release of Actual Sunlight holds up well and is just as deserving as it was when it first released.

To call such a game – nay, an experience – enjoyable feels innately at odds with the story it tells, and it’s certainly one that is likely to resonate with a wide audience on many a level. The story at hand is dreary, depressing and, for most, somewhat relatable. Evan Winters, a mid-30’s individual, appears to be in an unquestionable rut, going through the motions from day-to-day. He wakes up, goes to work, goes home and then, eventually, to bed, day in day out. The mundane becomes routine and the seeping, lingering thought of suicide enters his psyche, eating away at his spirit, becoming all-consuming. Whilst the latter of the routine may not hopefully be something we are all accustomed to, the former certainly is, and this link – regardless of how tenuous it may be as this will range from person to person – is potentially the key factor in initially engrossing you from the get-go.

Playing out more akin to a visual novel with light and sporadic “gameplay” moments, Actual Sunlight lasts but a mere few hours at best, but feels all the more impactful for it. Any less and the story would have struggled to find a solid footing and to sink it’s emotional, metaphorical hooks in you. Any more and the many plights of the lead would have lost the severity they once had and crumble under the weight of the story that is begging to be told. In perfecting restraint, the length of the title feels purposeful and it certainly all the better for it. The masterful execution of the gameplay elements naturally complements the aforementioned narrative, featuring both a simple and clean, albeit bordering on basic, graphical style alongside an equally simple UI. Should the graphical style have been any more involved, the impactful nature that the story lends itself towards could potentially be lost, muddied by a split in attention. It may not be to everyone’s tastes, but it serves its purpose by being present and merely the tracks for the narrative to travel along.

Likewise, a cohesive soundtrack and other musical elements are otherwise lacking, potentially to keep the stripped back experience yet again. However, unlike the graphical style, I feel as if an impactful score could dramatically heighten the more dire of scenes – think the emotional scores of Thatgamecompany’s Journey, composed by the brilliant Austin Wintory – although I see the argument in favour of silence equally as appealing in the vast majority of circumstances. Still, I’m a huge advocate of memorable and impactful music being included within video games and, as such, it did leave me somewhat disappointed, constantly agonising over the many missed opportunities throughout.

Once again likening this to Hellblade which, yes, obviously had both a much larger team and budget, you’ll be disappointed should you expect the same 50/50 split in gameplay and narrative. Instead, Actual Sunlight is a narrative-first behemoth that takes you for a devastating drive as an anxious passenger, ever questioning what’s around the next bend. Ethan Winters has you watch the mundane, the expected, and the depressing, taking you to places that you never thought you’d visit in an interactive experience. You may not act as the driving force, ever pushing forward to the next narrative beat whilst being enthralled in both the story and gameplay in equal measure, but that doesn’t lessen the execution and lasting impact that the story at hand has on you. It’s certainly one to keep you busy on a dreary afternoon should you fancy yourself a wildly different experience than most can offer. Just don’t go in thinking this isn’t the short-lived, finite narrative experience that it is. 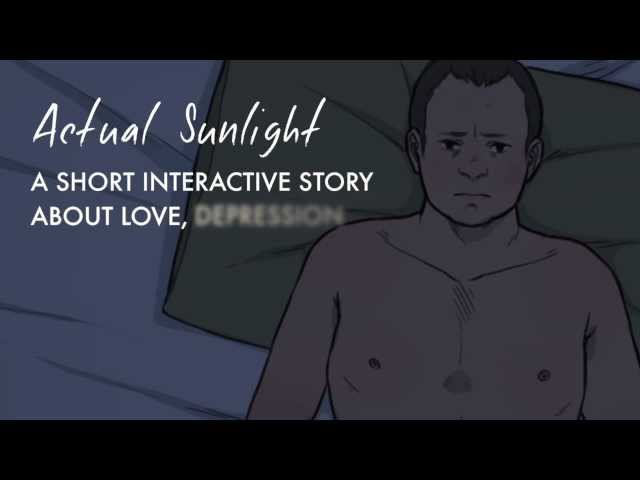