Georgina Howlett checks out Quill Studios’ first release in her review of A Summer with the Shiba Inu. 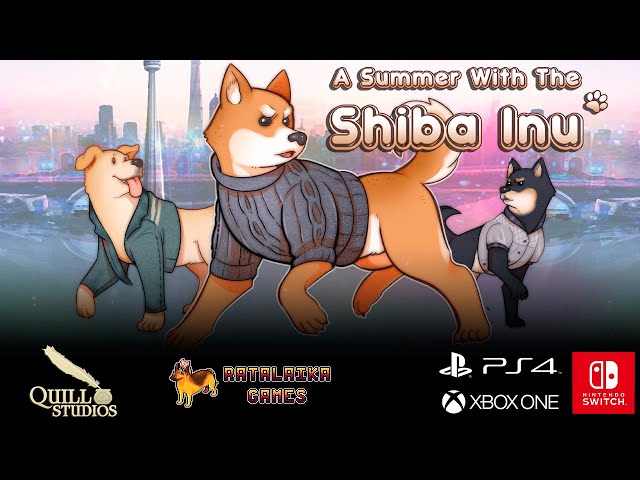 As a self-confessed cynophilist, I couldn’t help but be intrigued by Quill Studios’ debut release A Summer with the Shiba Inu. This visual novel boasts 70,000+ words of story, and takes place in a futuristic world where dogs are the dominant species and live completely independently of humans. Having made incredible advances in both construction and technology, the dogs of Shiba Island determine their social ranking through virtual battle royale-style tournaments called “ARInas”, where each dog’s goal is to evade elimination for as long as possible by avoiding the destruction of their personal pendant. For the most ruthless and cunning dogs – those who can survive through multiple ARInas, and defy all the odds – the ultimate prize awaits in the form of the “Feather of Truth”, which has the power to manipulate and change reality according to the bearer’s will.

Syd the Shiba Inu returns to Shiba Island after a ten-year absence, and in her quest to find her missing brother, is reunited with old friends, forms new bonds, and must finally come to terms with the reasons why she fled the island in the first place. As the current bearer of the Feather of Truth, she is renowned for her unparalleled performance in her past ARInas, and upon her return, is hunted by several of her past foes who seek both revenge on her and answers from her.

Your choices at various points throughout the story determine Syd’s movements, and subsequently which ending you will end up with. You’ll learn more about the ARI – the organisation behind the ARInas – and about Syd’s own past, as well as uncovering uncomfortable revelations surrounding the Feather of Truth, the ARInas and beyond. Your encounters with characters such as the mysterious labrador Quei-Li and your old rival Hei-fen Hong drive you forward, and in each of the game’s endings, Syd follows a different path; some are peaceful, some are destructive, and some are downright weird. No matter which ending you first follow, however, Syd’s journey to find her brother, her true purpose and ultimately herself within the complex worlds of Shiba Island and Canine-da will pull you in, and leave you wanting to play the next ending to see where it will take you.

As with many visual novels, A Summer with the Shiba Inu utilises static backgrounds with unanimated character models of the various dogs as the vehicles to tell its stories. While the character models and backdrops are detailed, authentically showing a futuristic, dog-dominated world, they are admittedly repetitive and lack significant variation. Each dog has a slim range of unique poses and expressions that you will initially be impressed by, but over time and especially in subsequent playthroughs, these grow to feel stagnant and the magic of each dog’s personality is somewhat lost.

Though the graphics grow somewhat repetitive, the background music and sound effects, the supporting animations (such as the individual loading icons for each dog species in the dialogue text box) and narrative ensure that the overall experience is one to enjoy. The sound effects create an immersive environment, and the music a sense of calm or tension depending on the part of the story currently on-screen. It is easy to become invested in Syd’s story, even if at points you question the direction of the game, and perhaps at the end wonder if more could have been done to tie up the loose ends scattered throughout the storytelling.

The numerous ease-of-play features mean that you can quickly navigate through the game if you wish, and if you miss any dialogue or just want to revisit a previous section, there is a dedicated log which documents all of the past interactions you’ve had on your journey. It is easier to fast-forward through all of the previously seen dialogue using R1 than to re-read everything again in subsequent playthroughs, and this is what I admittedly resorted to doing in my last couple of runs, as there is little variation in the initial sequences of the game. There are several other unique features littered throughout the game which will appeal to dog enthusiasts, too, such as the random facts about dogs in the menus, and the dedicated “dog bark” button in the preference menu; all of these come together to create an immersive canine-centric experience that is worth the few hours it takes to complete it.

Additionally, A Summer with the Shiba Inu sports a fairly easy achievement list, so if you’re an achievement hunter, this game will surely appeal. Not only is its story short (approximately 10-12 hours to complete all endings, if reading all dialogue in the initial run and skipping all seen before dialogue in subsequent runs) and enjoyable, but each achievement can be unlocked by pursuing each of the available endings, so you don’t have to make much extra effort to 100% the game. If you’re smart about it, you can use the many save slots to record your progress at the various decision-making parts of the game, and save lots of time in completing each ending. Plus, the achievement icons themselves are largely icons of the various dogs from the game, and who wouldn’t want the faces of cute dogs adorning their profile?

Overall, if you’re a fan of dogs, visual novels, science fiction stories and easy achievements, A Summer with the Shiba Inu is for you. Its premise is intriguing, its various endings are worth playing through the game for, and though fast-forwarding through all of the previously-seen dialogue can be a bit of a chore in subsequent playthroughs, on your first journey with Syd, you’ll be curious to see what happens to her next. Take some time to give the dog bark button a bash, too – but don’t get too woof with your controller.

brand
A Summer with the Shiba Inu | The Digital Fix