Ryan Reynolds’ new movie Free Guy, where he plays a sentient NPC in a videogame, may feature plenty of surprise celebrity appearances, but is distinctly lacking Asgardians. In a recent Instagram exchange, Reynolds has jokingly explained why Chris Hemsworth didn’t have a cameo in the hit action movie.

Much like all the videogame references seen in Free Guy, the comedy movie has plenty of surprising cameos for cinephiles to try and spot. A-listers such as Channing Tatum, John Krasinski, Hugh Jackman, Dwayne Johnson, and Chris Evans all appear in the flick. Reynolds took to Instagram to thank the stars and posted a pic of himself with the actors on a carousel. The caption reads: “This movie is about friendship. And friendship is at its simplest, just showing up. While I don’t have photos of everyone, here’s to all the incredible pals who showed up for this film.”

Under the cute appreciation snap, Thor actor Chris Hemsworth made a sarcastic joke, hinting that he may have been asked to appear in the NPC romance movie too, or perhaps cheekily pointing out the lack of invitation to do so. Responding to the post, he wrote, “least [he] could do.” Reynolds played along with the banter and replied, “[Chris] Evans said you weren’t ‘camera ready.’ Whatever that means.”

Although it is unclear why Hemsworth couldn’t make it for Free Guy, and there is obviously some inside joke that the public isn’t clued in on just yet, Hemsworth’s absence could have something to do with scheduling conflicts. He was working on the thriller movie Extraction around the same time. Here is a picture of the exchange, courtesy of commentsbycelebs.

Free Guy was initially scheduled to come out in 2020. However, due to Covid-19, it was delayed. As production dates have been a tumultuous thing over the past two years, it’s understandable why certain cameos just couldn’t feasibly happen for the movie.

Hemsworth is currently gearing up for another outing in the Marvel Cinematic Universe. The actor is again taking up the Norse God of Thunder’s hammer for Thor: Love and Thunder, which will be released in May 2022. Free Guy is currently out in cinemas. 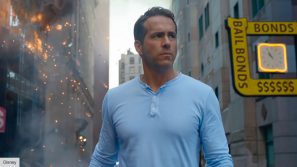