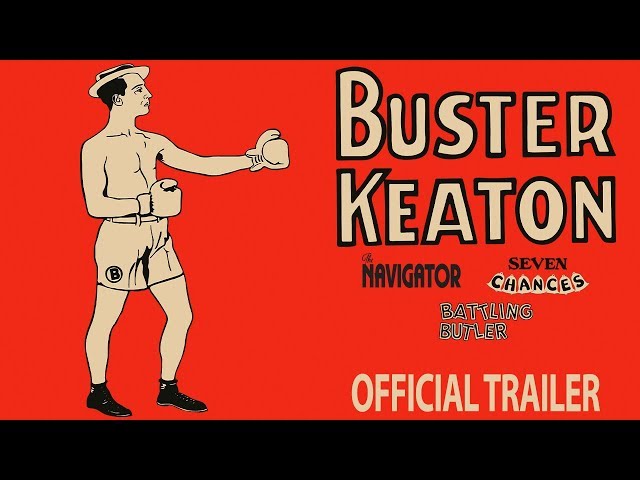 Eureka Entertainment are to release Buster Keaton: 3 Films (Volume 2), a further collection of essential films from the true genius of silent comedy available for the first time on Blu-ray in the UK from 4K restorations. It will be presented as part of The Masters of Cinema Series from March 30, with a Limited Edition 60-page Perfect Bound Collector’s Book and Limited Edition Hardbound Slipcase (3000 copies only).

Between 1920 and 1929, Buster Keaton created a peerless run of feature films that established him as “arguably the greatest actor-director in the history of the movies”. Collected here are three further films from that era; The Navigator, Seven Chances and Battling Butler.

The Navigator (1924, dir. Buster Keaton & Donald Crisp) – Wealthy Rollo Treadway (Keaton) suddenly decides to propose to his neighbour across the street, Betsy O’Brien (Kathryn McGuire), and sends his servant to book passage for a honeymoon sea cruise to Honolulu. When Betsy rejects his sudden offer however, he decides to go on the trip anyway, boarding without delay that night. Because the pier number is partially covered, he ends up on the wrong ship, the Navigator, which Betsy’s rich father has just sold to a small country at war. Keaton was unhappy with the audience response to Sherlock Jr., and endeavoured to make a follow-up that was both exciting and successful. The result was the biggest hit of Keaton’s career.

Seven Chances (1925, dir. Buster Keaton) – Jimmy Shannon (Keaton) learns he is to inherit seven million dollars, with a catch. He will only get the money if he is married by 7pm on his 27th birthday, which happens to be that same day! What follows is an incredible series of escalating set-pieces that could only have come from the genius of Buster Keaton.

Battling Butler (1926, dir. Buster Keaton) – A rich, spoiled dandy (Keaton) pretends to be a champion boxer, “Battling Butler”, to impress the family of the girl he loves. When the real Butler shows up, he decided to humiliate the imposter by having him fight the “Alabama Murderer”!

brand
Buster Keaton: 3 Films (Volume 2) arrives on Blu-ray at the end of March | The Digital Fix