Dan Gilroy’s impressive directorial debut is an engrossing crime-thriller that explores a sociopath and his search to prove himself. This tense and unsettling film turns out to be surprisingly satirical as it explores the media’s thirst for violent news and one man’s determination to stand out from the crowd.

Jake Gyllenhaal plays Louis Bloom, an ambitious, driven loner who quickly becomes the go to guy in LA’s underworld of freelance crime journalism. Armed with a camcorder, a police scanner and an unwavering determination to learn the trade, he films horrific crime scenes before selling his footage the local news. While in some senses he’s your typically alienated individual, (he lives alone, appearing to have no friends, family, or relationships to speak of) it quickly becomes clear that he has enough confidence, intelligence and Machiavellian instinct to become powerful and, perhaps, dangerous.

His capacity to exploit and manipulate others is revealed through his relationship with a number of characters. Firstly there is Nina (played by Renne Russo, who incidentally, is Gilroy’s wife) a news director who champions the slogan ‘if it bleeds, it leads’. By now an experienced veteran of the ruthless industry, we are introduced to her in the cutting room, editing footage with enough passion and precision to suggest she’s working on an Oscar-worthy masterpiece rather than the six am news slot. Then there’s Rick (Riz Ahmed) a young man desperate for work who becomes Bloom’s assistant, navigating and providing backup camera work as they scour the city.

As Bloom’s fearless approach to the work earns him a reputation, his willingness to manipulate and jeopardise others for the sake of a shot becomes increasingly obvious. He could be an extreme creation of Ayn Rand – selfish and sinister, a man whose rational mind is the only thing that guides him and for whom the ends will always justify the means. As such, he and the local news organisations are a match made in heaven - ethical considerations are irrelevant, the basic economics of supply and demand rules. The local media here are portrayed as being shamelessly obsessed with selling violent crime as entertainment, and the reasons for why this works so well are clear – it keeps viewers both addicted and afraid. And so the film is able to raise all sorts of questions about our relentless appetite for violence, in particular to what degree is it part of our human nature or a product of social and cultural influence? 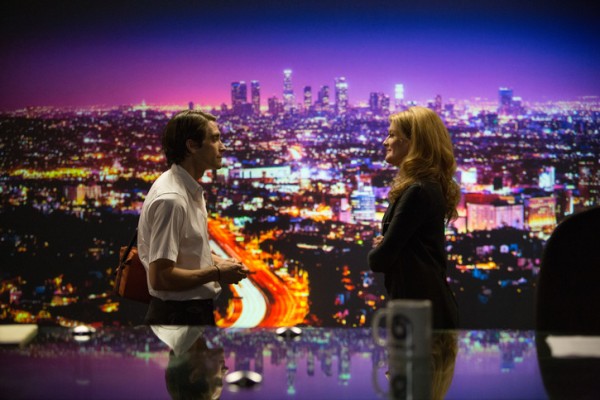 Gilroy has been researching the topic for years, approaching the project with the sort of obsession and attention to detail with which Bloom carries out his own work. Howard Raishbrook, a real life nightcrawler and veteran of the industry, was a technical advisor on the film. The director scored a great coup in bringing Robert Elswit on board as cinematographer, a prolific figure who won an Oscar in 2007 for ‘There Will Be Blood’ and he deserves plenty of credit once more. Nightcrawler is a beautifully shot film; the opening takes of the city at night, dark and mysterious, hint at the seedy underworld hidden beneath the glitz and glamour of the Los Angeles skyline.

The whole cast are excellent but clearly this is Gyllenhaal's film; his subtle and chilling performance may be the best of his career. More is often made than necessary about actors losing weight for roles, but as Louis Bloom stares sickeningly into the camera, face gaunt and devoid of emotion, it’s clear that this is no mere award season gimmick. Whether Nightcrawler's achievements are recognised early next year really doesn't matter. It succeeds where many thrillers fall short, by absolutely nailing its pacing and keeping the audience glued to the edge of their seat throughout. It's also thought provoking, darkly comic and offers an interesting take on a number of issues of contemporary relevance, making it a brilliant cinematic experience all round.