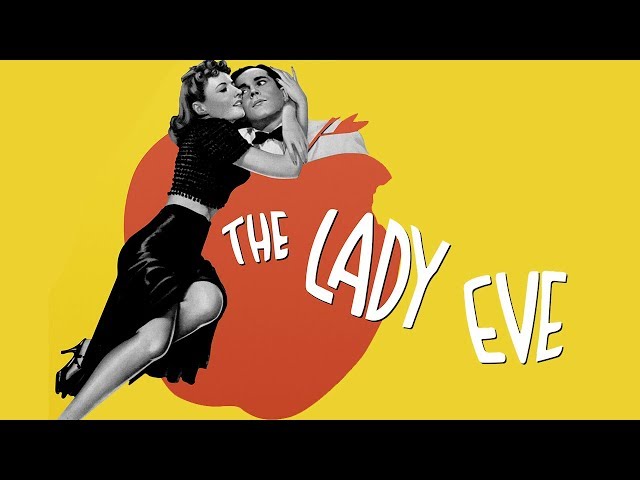 In these miserable, Covid-ravaged times, it is hard to imagine a more effective pick-me-up than The Lady Eve, Preston Sturges’ sparkling screwball comedy from 1941. Barbara Stanwyck is Jean Harrington, one of a team of card sharps at loose on an ocean liner. They make ‘Hopsy’ Pike (Henry Fonda), the maladroit heir to a brewery fortune with an interest in snakes, their next target, but the plan goes awry when Jean and ‘Hopsy’ fall for one another. When he discovers the truth about her, the pair immediately separate but, months later, after nabbing an invitation to attend a party at the Pikes’ grand Connecticut mansion, Jean transforms herself into Lady Eve Sidwich, a supposed member of the British aristocracy, with ‘Hopsy’ once again in her sights.

Any screwball comedy worth its salt is both relentlessly paced and relentlessly funny, and that is certainly true of The Lady Eve – slapstick, romance, double entendres, and satire all coming at you thick and fast. Fonda had already worked with Stanwyck on a comedy (1938’s The Mad Miss Manton) and the pair have an easy chemistry here. And for an actor who spent much of his career in serious dramatic roles – he’d already appeared in the likes of Young Mr. Lincoln (1939) and The Grapes Of Wrath (1940) – Fonda proves surprisingly adept at ever-more elaborate pratfalls. But it’s Stanwyck who deserves the lion’s share of the plaudits; she’s superb as both Jean and Eve, her posture, accent, and mannerisms changing completely for the two different characters.

This is a film that has fun subverting gender roles (Jean is the aggressor, Hopsy her meek and mild prey), delights in poking fun at the rich, and explores its Biblical ‘fall of man’ theme with wit and invention. A superb supporting cast – exemplified by William Demarest’s no-nonsense Muggsy (“It’s the same dame!”) – is just the cherry on top of a stone-cold classic the New York Times made its #1 movie of 1941 – ahead of Citizen Kane.

There are a lot of very good supplements here so let’s just mention a few of them. In a definite sign of the times, Tom Sturges (son of Preston) hosts a discussion about the film over Zoom (42 minutes) with a host of eminent filmmakers and critics, including Peter Bogdanovich, Susan King, and Leonard Maltin (James L Brooks has to leave the as-live discussion when his internet goes down). In a thoroughly entertaining back and forth, they touch on the director’s battle with censors over some of The Lady Eve‘s risqué-for-the-time content, and how Sturges didn’t write his scripts but dictate them, playing all the parts himself. In her audio commentary, Marian Keane offers an academic reading of the film, deep-diving into its themes and motifs, and frequently referencing Stanley Cavell’s seminal essay on The Lady Eve in his 1981 book Pursuits Of Happiness. I also loved the short feature (6 mins) about Edith Head’s costumes and Up The Amazon (5 mins), a song from a mooted musical adaptation of the film.

Noah Baumbach’s Marriage Story chronicles another tempestuous relationship, but the laughs on offer are fewer and bleaker, as Scarlett Johansson and Adam Driver’s divorcing couple declare war on each other. The film – originally released on Netflix last year – sees actress Nicole (Johansson) leave husband Charlie (Driver), and his New York-based theatre company, for a new life and TV career in Los Angeles. The pair initially hope their divorce – and custody of son, Henry – can be settled amicably, but when lawyers get involved (including Laura Dern’s fabulously combative Nora Fanshaw) battle lines are drawn and all attempts at politeness and decorum swiftly go south.

Scenes From A Marriage (1974), Kramer vs. Kramer (1979), The War Of The Roses (1989), and Baumbach’s own The Squid And The Whale (2005) show films about marital implosion are hardly anything new, but the director, a divorcee himself, is as much intrigued by the practicalities and nitty-gritty of separation as he is the raw emotion. Both writing and cast (which also boasts Alan Alda, Ray Liotta, Julie Hagerty, and Meritt Wever) are magnificent, and I loved the nod to Herbert Ross’s California Suite (1978), one segment of which sees Jane Fonda’s tough-cookie New Yorker fly to LA to confront ex-husband Alda about custody of their teenage daughter.

The centrepiece of the supplements is a feature-length video diary (1hr 37mins), which includes a wealth of previously unseen on-set footage. We’re shown filming on many of Marriage Story‘s key scenes (including the apocalyptic bust-up between Charlie and Nicole in his LA apartment), the mechanics of directing and acting – the endless discussions, negotiations and trial and error of it all – laid bare. Elsewhere, you’ll find interviews with Baumbach and most of his cast (Wever the only notable absentee), which, in amongst the usual superlatives and backslapping, explore the director’s preferred way of working (lots of takes, obsessional attention to detail). Better are crew segments with editor Jennifer Lame and production designer Jade Healy, who really get into the day-to-day challenges of their respective crafts. Perhaps my favourite part of the whole impressive package, though, are paper facsimiles of the ‘therapy letters’ Charlie and Nicole read out at the start of the film. It’s a really nice and inventive touch.

I adored all three films in Abbas Kiarostami’s Koker Trilogy, which Criterion released as a boxset last year, but the same director’s Taste Of Cherry is a tougher, more oblique proposition. Homayoun Ershadi – who you may remember from Zero Dark Thirty (2012) and A Most Wanted Man (2014) – is Mr Badii, a mysterious stranger who drives around the barren outskirts of Tehran, occasionally stopping to ask random men if they would be interested in doing a well-paid job for him. You wonder at first if he is a murderer looking for a victim or after some sort of sexual favour, but it is eventually revealed Badii is planning to commit suicide by taking an overdose of pills and wants someone to bury his body. At no point do we discover anything more about him.

Taste Of Cherry was the first Iranian picture to win the Palme d’Or, but while its minimalism and mystery initially intrigue, the film itself is difficult to get a bead on. Badii’s request is rebuffed by several men – including a terrified young soldier and a religious scholar – before Mr Bagheri, a taxidermist who once contemplated suicide himself, agrees to help, even while trying to talk him out of his plan. I think the idea is that, slowly but surely, as the film proceeds, Badii is presented with more and more reasons to live, some of them seemingly small, like the taste of cherries. To underline the point, the ugly construction sites featured in the early part of the movie give way to beautiful, life-affirming countryside, as we move into its final act. And even though I found the ending exasperating, it’s of a piece with Kiarostami’s penchant for revealing the artifice in his films.

Even if you’re a dyed-in-the-wool fan of Kiarostami, I’d suggest you take a look at a couple of the supplements before watching the film, as they explore some of Taste Of Cherry‘s themes and ideas. Film scholar Professor Kristin Thompson discusses the use of landscapes and cityscapes in the director’s work (7 mins), even comparing his visual connection to the outskirts of Tehran and northern Iran with John Ford’s penchant for filming in Monument Valley. And author Hamid Naficy (17 mins) talks us through the film and Kiarostami’s career, highlighting his economy of expression and the simplicity of his mise en scène (in Taste Of Cherry‘s case mostly just the interior of a car). Elsewhere, there’s an excellent interview with the director from 1997 (19 mins) in which he discusses censorship, his preference for movies that “put you to sleep”, and meeting Quentin Tarantino at a film festival.

Supplementary material includes audio commentaries on six of the films and a truly dizzying array of documentaries (including 1969’s Fellini: A Director’s Notebook), short films, interviews, and video essays. The set also boasts “deluxe packaging” with two “lavishly illustrated” books. Unlike the recent Agnès Varda boxset, though, this won’t be a region-free release. The 4K restorations and fantastic supplements are incredibly tempting, but Fellini fans will already have a fair few of the actual films on Blu-ray (as recently as March, Cult Films released a UK boxset – Fellini: Four Films – featuring 8½, Le Dolce Vita, Juliet Of The Spirits and I Vitelloni), so I’m uncertain a very pricey double dip is worth it.

Finally, I’d like to draw your attention to Why Are There So Few Black Directors In The Criterion Collection?, an alarming recent article in the New York Times. Journalists Kyle Buchanan and Reggie Ugwu surveyed all 1,034 feature-length films released by Criterion in the DVD/Blu-ray era (up to the end of June) and discovered only four African-American directors were represented, along with another four black directors from outside the US. Worse still, the company had had opportunities to licence movies by black filmmakers, including Julie Dash’s influential Daughters Of The Dust (pictured above), but had turned them down.

And while some argue Criterion are being held to a higher standard than similar boutique labels (Kino Lorber, Arrow, Indicator etc), it’s a standard the company – which has been releasing films in various home entertainment formats since 1984 – has done its best to invite. You certainly don’t get dubbed the “Louvre of movies” by Wes Anderson unless you hold a significant place in worldwide movie culture.

As a white writer, who pens a monthly column about the label and buys a lot of its films (they don’t send me the titles I review here), I’m embarrassed for not noticing this terrible imbalance. I’d seen Criterion recently release Charles Burnett’s To Sleep With Anger and Spike Lee’s Bamboozled, noted how they professed support for Black Lives Matter and made movies by certain black filmmakers available free on their US streaming service, and naively assumed they’d been doing their bit. I can only hope the company now takes steps to start rectifying the situation and it’s something this column will certainly keep an eye on in the months ahead.