Reviews of Female Trouble, The Cameraman, and Three Outlaw Samurai. 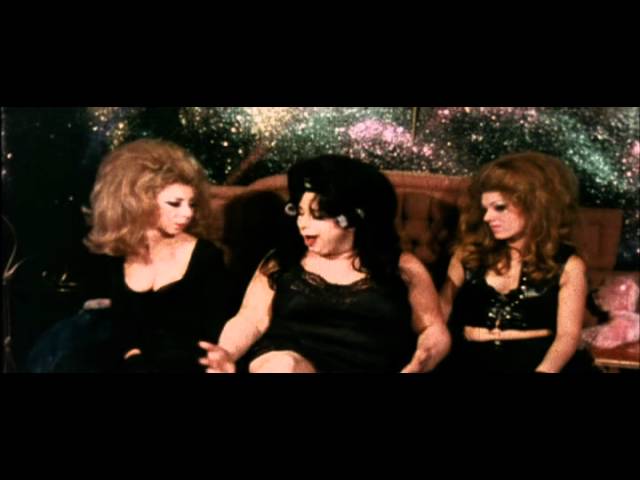 Von Sternberg had Marlene Dietrich, Kurosawa had Toshiro Mifune, and John Waters had Divine, the late actor/singer/drag icon with whom the Pope of Trash worked on six features and three shorts in a filthily fruitful 20+ year relationship. Female Trouble (1974) – a grotesque comic melodrama in which Divine plays fame-hungry “crime model” Dawn Davenport – was both Waters’ and his 300Ib muse’s favourite of their collaborations and it’s easy to see why.

The thing about Waters’ early films is that people get so hung up on the pooping and puking, they forget just how very funny and inventive they are. Wickedly sharp lines abound in Female Trouble (the best too lewd to repeat here) and scene after scene is packed with slapstick violence, off-at-a-tangent plot twists and hilarious character moments. The sequence in which the two characters played by Divine – Dawn and mega-slob Earl Petersen – appear to have sex outdoors on a grubby mattress is not only queasily hilarious but cleverly shot too.

There’s a black-hearted glee to Waters’ best films and that is certainly true of Female Trouble, Divine channelling her heroine Elizabeth Taylor early on, before transforming into the kind of gonzo pantomime monster she played to such startling effect in Multiple Maniacs and Pink Flamingos. She lops off one character’s hand (Edith Massey, imprisoned in a bird cage), murders several more and, resplendent in an outrageous mohawk (pictured above), even makes time to anticipate punk. In a coronavirus-inspired cultural moment when everything feels a little too polite, Female Trouble – and its establishment-baiting “crime is beauty” theme – remains a welcome kick in the nuts of decency and good taste.

The supplements are every bit as impressive as the film, which looks gorgeous in a restored 4K digital transfer supervised by Waters. The director provides a commentary recorded in 2004 and recounts a host of hilarious anecdotes from the shoot (my favourite remains the one about the three-day-old baby smeared in fake blood and shoved up Divine’s dress for a child-birth scene), before turning more serious to discuss his opposition to the death penalty and “friendship” with Manson Family murderer Tex Watson. Additionally, there’s a veritable smorgasbord of interviews, talking heads, on-set footage and cut scenes and snippets, including film of Divine, as Earl Petersen, trying and failing to make himself throw up on co-star Mink Stole. If you want wholesome and classy, look elsewhere.

Humour of a less savage variety can be found in The Cameraman (1928), silent-era superstar Buster Keaton’s first feature for MGM and perhaps his last truly great film. Keaton plays a clumsy portrait photographer trying to make it as a news-reel cameraman in a bid to get close to the fragrant Sally (Marceline Day), who works as a receptionist at MGM’s news-gathering studio. But his klutzy attempts at romancing Sally and chasing down stories with a battered, old-fashioned camera, lead Keaton into a number of scrapes, both hilarious and dangerous, most notably a violent gang war in New York’s Chinatown.

Keaton’s best films were relentless and breathless; walking down the street or getting on a bus could lead to all manner of inspired slapstick, and the moment one physical gag stopped, another immediately popped up to take its place, and so it goes here. I love the scene where Keaton and a total stranger try to get changed in a too-small cubicle at a swimming baths (“Will you keep out of my undershirt!”) and, towards the end, the impressively-staged Chinatown sequence in which Keaton – and the monkey he has acquired during the course of the film – fall to the ground atop a collapsing platform (it’s little wonder MGM moved to stop him doing his own stunts). Keaton later said moving to the studio from his own independent set-up had been the biggest mistake of his life (they terminated his contract in 1932), but although The Cameraman never quite hits the heights of Steamboat Bill, Jr.‘s cyclone sequence or comes close to matching The General‘s vaunted ambition, it isn’t far off his best work.

The selection of supplements is outstanding. In the audio commentary for The Cameraman (from 2004), British author Glenn Mitchell does a fine job of contradicting the perception of Keaton as the “Great Stoneface”, pointing out the enormous expressiveness of his eyes and body in several scenes. The underrated Spite Marriage (1929), the second film Keaton made for MGM and his final silent feature, is also included in a new 2K restoration and gets its own commentary too, courtesy of authors John Bengtson and Jeffrey Vance. So Funny It Hurt (38 mins) is an excellent documentary detailing Keaton’s fraught relationship with MGM and the deleterious effect it had on his personal life, while, in an interview, author James L Neibaur talks about the performer’s later, post-MGM career (14 mins).

There’s also a nice short film (16 mins), in which Bengtson (again) turns detective to track down some of the more obscure Los Angeles locations used in Keaton’s films, and another (33 mins) which traces the evolution and development of the movie camera. A meaty 38-page booklet features a typically scholarly essay by Imogen Sara Smith and a fascinating chapter from Keaton’s 1960 autobiography.

Rounding off an impressively diverse set of releases this month is Three Outlaw Samurai, director Hideo Gosha’s debut film from 1964. A spin-off of a popular Japanese TV show (which Gosha worked on), it’s an origin story detailing how the titular trio – noble Shiba (Tetsurô Tanba, pictured above), conflicted Sakura (Isamu Nagato) and cynical Kikyô (Mikijirô Hira) – came to team up in the first place.

The film effectively interrogates notions of duty, honour and sacrifice as the three heroes become embroiled in a stand-off between desperate peasants and a corrupt local magistrate. And while this is a chanbara (sword-fighting movie) that owes a certain debt to Akira Kurosawa – particularly The Seven Samurai (1954) and Yojimbo (1961) – it is no less compelling for that. Three Outlaw Samurai is smartly, economically told, the action sequences are suitably frenetic and the moment, towards the end of the film, when the three finally stand shoulder to shoulder, to face off against a veritable army of the magistrate’s mercenaries, will give you goosebumps.

It’s just as well the film is so entertaining because it’s been a long time since I was so disappointed in a Criterion disc’s supplementary material. There’s an over-the-top trailer (“Are they mad dogs or starving wolves?”), and critic and filmmaker Bilge Ebiri’s essay in the accompanying booklet is wonderfully detailed, but that’s all you get. No commentary, no interviews, no featurettes delving into the history of chanbara, Three Outlaw Samurai’s roots on Japanese TV, or Gosha’s long and varied career (he made 27 films between 1964-92). A missed opportunity.

A few news snippets on which to end…

UK Criterion has just announced its October release schedule and there are a couple of interesting firsts. Topsy-Turvy (from 1999 and pictured above) is the first by director Mike Leigh to be added to the UK collection and, even more surprisingly, Eraserhead (1977) is the first from David Lynch. Both filmmakers have multiple titles available via Criterion in the US, so hopefully more releases will follow on this side of the pond before too long. Oscar-winning documentary The Times of Harvey Milk (1984) rounds off October’s new releases.

Back in March’s column, I mentioned Criterion was releasing Elem Klimov’s powerful World War II film, Come And See, in the States at the end of June. I’d been keeping my fingers crossed a UK release would swiftly follow but, due to some sort of snafu with the BBFC, that doesn’t seem at all likely now. However, the good news is that the disc released in the US has both Region A and B coding, making it compatible with UK Blu-ray players.

Finally, US Criterion are adding Bong Joon Ho’s multiple Oscar winner Parasite to the collection on October 27. Yes, the film has already been released on Blu-ray in the UK through Curzon Artificial Eye, but a double dip might well be in order on this occasion, as the Criterion edition will include the much-talked-about black-and-white version of the film with a new introduction by Bong.

I’ll be back here next month to cast an eye over UK Criterion’s August releases – The Lady Eve, Marriage Story, and Taste Of Cherry.