Inside The Rock there lived a Birdman…

Director John Frankenheimer is one of cinema’s most important contributors. Do you like car chases? Grand Prix in 1966 established a method of filming them that would influence both Bullitt and The French Connection (to which he would direct the sequel in 1975, ironically featuring no car chase). And he cemented that reputation with the superb Ronin just a few years before his death. Frankenheimer would also set a template for the political thriller with the odd and edgy The Manchurian Candidate in 1962, the same year he directed Birdman of Alcatraz, released this month in a gleaming restored edition by Eureka! as part of their Masters of Cinema range, complete with Saul Bass’ original poster artwork on the cover. Frankenheimer certainly was a master. A short CV, but every film has a reputation and this one sits as a definitive prison drama.

It’s based on the true story of Robert Stroud. An extraordinary man, by all accounts a dangerous one, who died aged 72 having spent 54 of them behind bars and a good chunk of those in solitary confinement. Not a pleasant chap and yet, brilliantly intelligent to the extent that randomly caring for an injured bird would lead him to be a published author on the science of dealing with illnesses in birds. Birdman of Alcatraz, based on a book, is a stretch of a title though. Stroud was moved to Alcatraz late on and forced to leave his beloved birds behind.

Stroud is a truly fascinating man and the film seeks to pick apart how such a “brute would become a scholar” (as discussed in the lively commentary), while also attacking the US penal system. A tough pitch then. Drama versus truth is a regular battle in cinema and while Frankenheimer’s film has come in for some criticism as a liberal viewpoint of a convicted criminal, for my money, it walks a tightrope very well indeed. Still, it’s immediately throttled by starring lovely old Burt Lancaster. He has to work hard because he was Hollywood’s gentleman, so it’s hard to imagine him as a sociopath.

Despite an odd tone while the film wants us to sympathise with a convicted felon (there may have been no guilty men in Shawshank, but there definitely is here), it’s a stunning, committed performance. A brooding, hulk of a man, in the first acts it is established that he is a thug and deserves his punishment, which Lancaster just about sells, despite the melodramatic script wanting to only pay it lip-service and get on with the hook of the story: that this murderer could tend to another creature with a strange kind of love; and what is rehabilitation really worth?

As Birdman of Alcatraz runs on into the last two-thirds, the dialogue loosens up and so to any adherence to historical accuracy, which matters not a jot. The US penal system is broken and it seems it always has been, and that’s the story. If a man can change as much as Stroud does, where do you draw the line? Why is he behind bars? Stroud’s reputation may or may not be deserved, but the film version is a dignified poster-boy for protesting a system designed to swallow people up and bury them alive.

Your own political sensibilities may inform how much of the liberal story you are willing to buy, but whichever way you lean, as a piece of cinema it is a thing of beauty. Frankenheimer wrings potential out of restricted sets with wonderful photography, particularly in the scenes with the birds. Proper, “how did they do that?” moments and the film settles into a routine of One Man and his Bird(s). The pacing of this lengthy film is such that it is always engrossing, which is impressive for a story about a guy talking to birds and slowly building cages before reading a lot of books. The trick is a narrative powered by suppressed self-righteous anger and a fantastic cast. It’s a great story, uplifting and occasionally profound. It never loses the tendency to be a bit overwrought, but that should be forgiven.

Burt Lancaster was always brilliant and he gets some cracking support here too. Thelma Ritter, so memorable in slight roles such as in Rear Window, here gets her teeth into the more challenging part of Stroud’s overbearing mother. Telly Savalas turns up stealing scenes as a fellow con. Neville Brand is affecting as the prison guard who over a period of many years becomes the closest thing to a friend Stroud could claim. And finally, there is the wonderful Karl Malden in a complicated role as the prison warden. He is ostensibly the villain and has a vindictive streak where Stroud is concerned, but he is also the face of the prison system and Malden’s layered performance reveals a man dealing with many conflicts. The cast, and especially Lancaster’s Stroud, find the humanity in each character.

On balance, Birdman of Alcatraz shouldn’t have worked. It pushes and pulls in too many directions, and yet Frankenheimer’s sure-hand and a superb cast have produced a wonderful, timeless film that improves on multiple viewings. As an ode to the human spirit, it is peerless.

The commentary is a standout. The three-way conversation is as entertaining as it is enlightening. Paul, Julie and Nick debate the film’s method, production and reputation, not shying away from the controversy of it being a story about a nice old murderer. So too Richard H. Kline’s video essay looks at the real Robert Stroud.

AUDIO and VIDEO
The quality of the transfer is excellent, clean and captures the depth of the film with strong contrast especially in the confined sets of the prison and especially so in Stroud’s cell, cluttered with birdcages.

The uncompressed (on Blu-ray) mono soundtrack is as clean as a bird’s whistle. This is a film with a limited range as you’d reasonably expect, nor is there a prominent score. Nevertheless, it’s a deceptive soundtrack, full of detail. 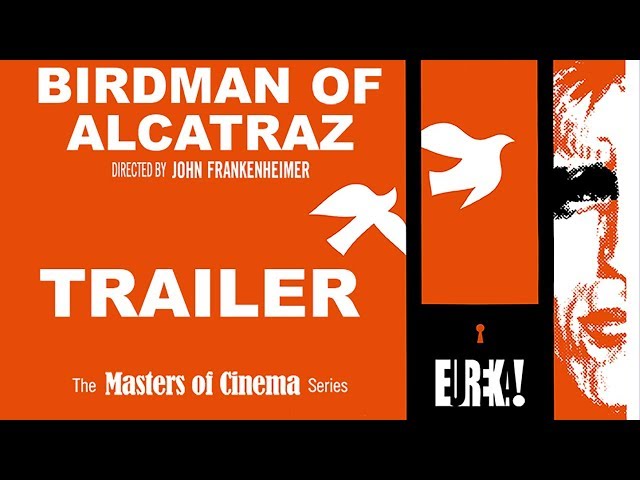