Reasons why people love Hayao Miyazaki’s My Neighbour Totoro are varied, some feel it’s the most universally accessible of Ghibli’s film while others believe it captures the imagination of childhood. People are drawn to this film for a number of different things, but we can all agree on one thing: even thirty years after its release, My Neighbour Totoro captures the heart and imagination of everyone who watches it.

At the heart of the tale are sisters Satsuki and Mei Kusakabe. After moving with their father to a dilapidated farmhouse a little bit nearer to the hospital where their mother is recovering from an unspecified illness, the curious pair spends their days searching their haunted house, taking care of their father, and exploring the surrounding woodland. In the latter, it doesn’t take long for the forest spirits to make themselves seen and finally we meet the titular neighbour, sleepy Totoro, lounging in the hollows of a camphor tree. It’s rather apt that the iconic figure is introduced in such a way; he makes no threats nor does he swoop in as a hero. He sleeps, because what else should he be doing? The fact My Neighbour Totoro is still so poignant now as it was in 1988 can be brought down to its languorous narrative. It simply follows one family; their interactions with each other and with their neighbours (both fantastical and ordinary). It tackles the anxieties of a family faced with illness as well as those of a society seeking refuge in nature in a postwar Japan with such nuance that the film can be enjoyed on so many different levels. It’s not by chance that this film followed Princess Mononoke in its release. Nature is a character in its own right and is depicted with an honest unpredictability: raindrops pummel the ground, but Totoro finds joy as they hit his umbrella, seeds struggle to grow in the dry heat, but the spirits enact ceremonial dances to get them to sprout. It’s magical but not so unbelievable.

My Neighbour Totoro paints the memory of childhood with colourful and optimistic brushstrokes. Even when Satsuki and Mei are fighting, there’s an understanding that it’s what sisters do. Satsuki might take on the role of mother for the boisterous Mei, but she cares for her like a sister does, just as Mei looks up to her for guidance and approval. Without ever being cloying, the film is hopelessly, wonderfully sentimental. And whether you believe Totoro and his fellow spirits are hidden animals of the forest or just figments of the young girls' imaginations, there is a feeling of wonder to be taken from this tale. 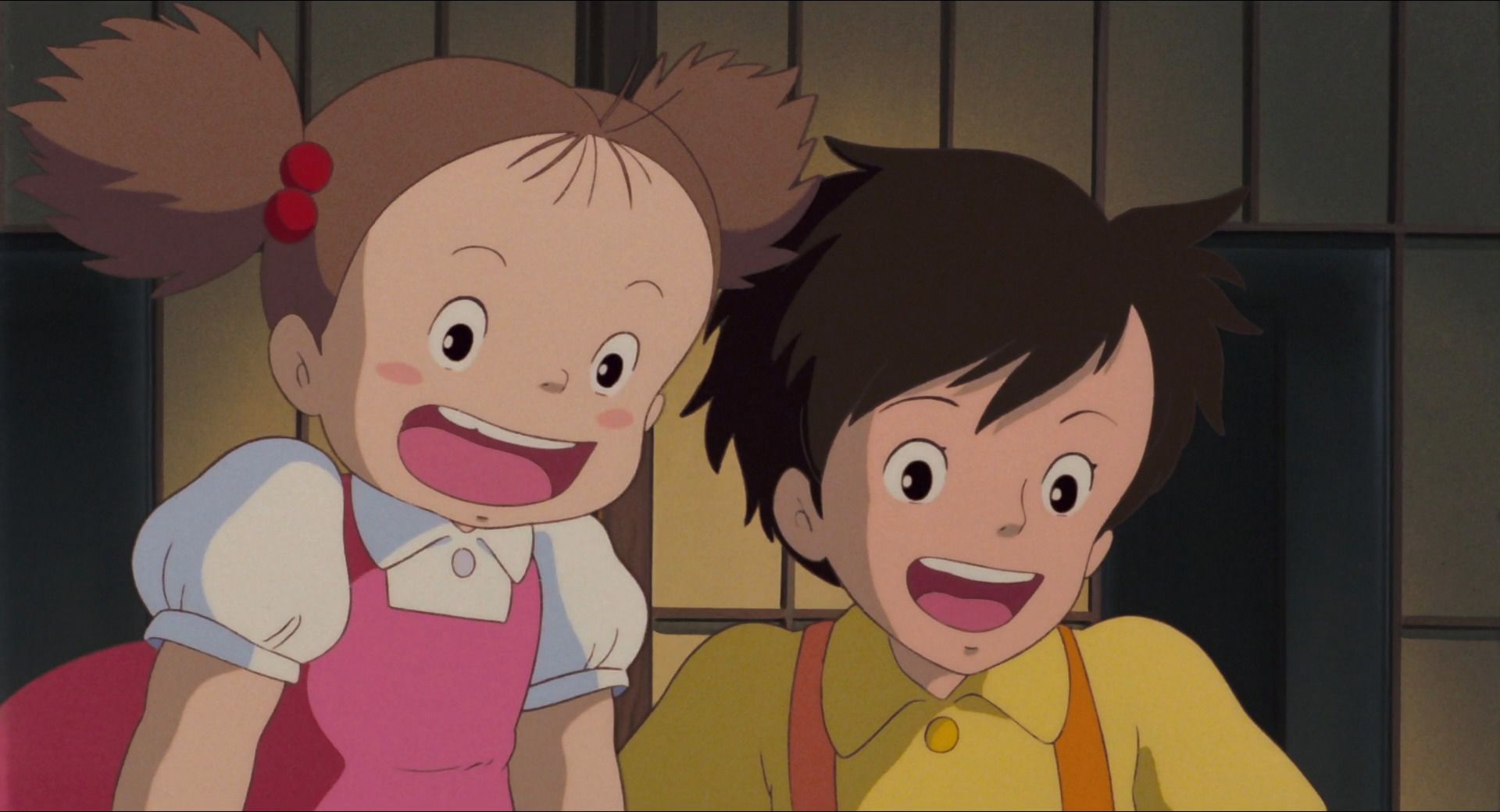 If your wonderment is not fully satisfied by the movie then there is plenty to keep you going in the special features including: Storyboards, Creating My Neighbour Totoro Featurette, Creating the Characters Featurette, The Totoro Experience Producer’s Perspective: Creating Ghibli, The Locations of Totoro, Scoring Miyazaki, Behind the Microphone Featurette, Textless Opening & Closing Credits, Original Japanese Theatrical Trailer, and Studio Ghibli Trailers Reel.  A must watch of these is Scoring Miyazaki, a featurette focussing on the work of Joe Hisaishi for Studio Ghibli films from My Neighbour Totoro to Kiki’s Delivery Service.

Totoro captures the whimsy of childhood and the heart of the audience - and on blu-ray I can't imagine it looking any better!