Earlier this year, Neill Blomkamp began work on a sequel to his hit science fiction movie District 9, and we finally have some plot details. Speaking to IGN, Blomkamp explained that District 10 will takes cues from “a topic in American history”, and that the reason it’s taken more than a decade to make is that he’s been looking for a topic worth exploring in the sequel.

“That script continues to be written. It’s looking good. It took a decade to figure out, to come up with a reason why to make that film as opposed to just make a sequel,” Blomkamp explained. “There was a topic in American history that the second I realised that that fit into the world of District 9, it felt like an awesome way to do a sequel. So yeah, it continues to be developed and it’s getting a lot closer.”

Unfortunately, Blomkamp didn’t say what the exact event in American history would be. District 9, of course, used alien refugees living amongst humans in Johannesburg to examine xenophobia and social segregation. The film was inspired by historical events during South Africa’s apartheid era, and we can probably expect Blomkamp to draw on a similar event in US history.

District 10 screenplay also being written by @sharlto @territatchell and I. Its coming…

Blomkamp first began teasing a sequel to his alien movie back in 2009 saying that if the film was popular enough he’d love to make another. Unfortunately, as is often the way, he soon found himself in high demand and a prospective District 10 fell by the wayside. Over the years both Blomkamp and his cast kept saying they wanted to revisit the world they’d created but they were struggling to find the time to make it.

Eventually, in February of this year, Blomkamp tweeted that he was finally moving ahead on a script for a sequel, titled District 10. District 9 star Sharlto Copley and the original movie’s co-writer Terri Tatchell are helping him with the screenplay.

District 10 has no release date as of yet, so while you wait, why not check out our list of the best horror movies. 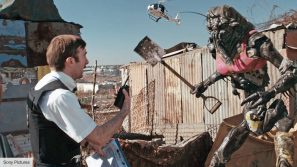