This isn’t the first costume Andy’s revealed online. Last week he shared a photo of Michael Keaton’s classic Batman suit with the iconic black and yellow chest symbol dripping in blood. Fans quickly pointed out parallels to Alan Moore’s Watchmen and The Comedian’s blood-spattered badge. While the exact meaning of the reference is unknown, fans of the Dark Knight believe it could hint at a darker take on the Caped Crusader.

With Michael Keaton and Ben Affleck both reportedly reprising their roles as Batman (Batmen? What’s the plural of Batman), it’s believed that The Flash movie will adapt the controversial Flash storyline Flashpoint. That story, which also includes two versions of Batman, sees the Scarlet Speedster trapped in a dangerous parallel timeline – after he accidentally breaks the space-time continuum – and he’s forced to try and set right what once went wrong, restarting the DC universe in the process.

This speculation aligns with comments made by The Flash producer Barbara Muschietti at the DC Fandome. “Flash is the superhero of this film because he is the bridge between all of these characters and timelines,” she said during the event. “And in a way, it restarts everything and doesn’t forget anything.”

Batman isn’t the only superhero Barry will be sharing the screen with. It was announced earlier this year Sasha Calle would make her Supergirl debut in The Flash. However, it’s currently unknown which version of the character she’ll be playing or how she factors into the overall plot.

The Flash has hit a few bumps in the road while racing to the silver screen. Warner Bros. started planning a Flash solo movie as far back as 2013, but the company struggled to find a director or script they were happy with. In 2020, the studio finally settled on Andy Muschietti as director, with a script from Christina Hodson, with filming beginning in April 2021.

The Flash crosses the finish line into theatres on November 4, 2022. 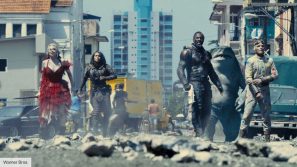