Beetlejuice is one of Michael Keaton’s stand out roles, and has gone down in history as one of the most beloved ghost movies of all time. However, it’s also a flick that the Oscar-nominated actor almost turned down. Directed by Tim Burton in 1988, the comedy movie is famously bizarre, and Keaton has revealed that it took designing Beetlejuice’s legendary look, for him to envision Burton’s kooky story.

During an interview with American journalist Charlie Rose back in 2014, Keaton shared how when Burton pitched him Beetlejuice, “he had no idea what he was talking about”. This caused the actor to turn down the offer to star as the obnoxious spirit several times. Recalling his conversation with Burton, Keaton explained, “I said, ‘I wish I could do it. You seem like a really nice guy and I know you’re creative, but I don’t get it.’”

Burton was obviously persistent, and the actor met with him a couple of times to discuss the horror movie until they had a breakthrough. It turns out the key to getting Keaton on board with the flick was through Beetlejuice’s distinctive grimy and pinstriped look.

“I said, ‘Give me the night or two days,’ and I called the wardrobe department at the studio and said, ‘Send me a bunch of wardrobes from different time periods, randomly. Just pick a rack.’ And then I thought of an idea of teeth and an idea of a walk,” Keaton recalled. 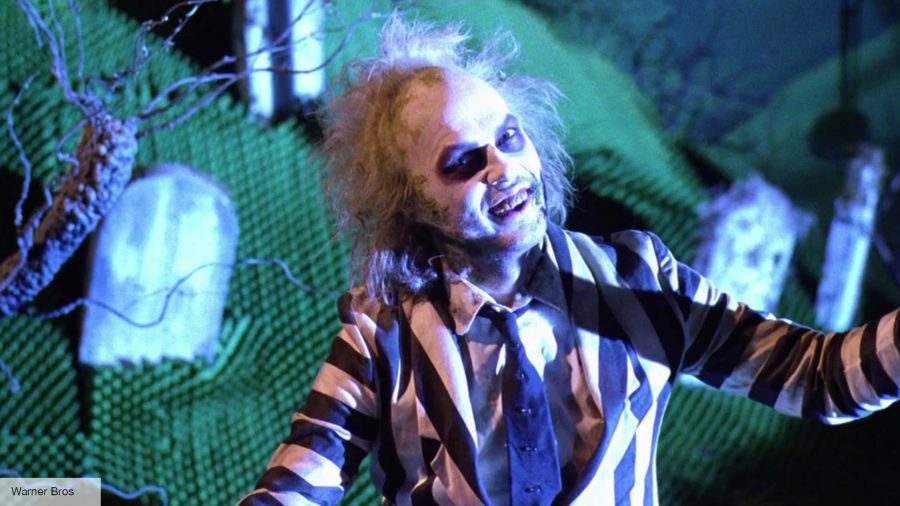 Keaton let Burton know that he had a plan up his sleeve. However, that is all the information the director got in terms of the ghost’s unique design. “Here’s the amazing part about it: He [Burton] never saw any of it. We discussed it. I said, ‘I want hair that looks like I stuck my finger in an electrical socket.’ And I said, ‘I want mold because Tim said he lives under rocks,’” Keaton explained. “So I showed up for work, and I walked on the stage and said, ‘This is either going to be way off the mark, or he’s going to — I don’t know what he’s going to do.”

The actor’s look was right up Burton’s creepy street, and the rest was history. Keaton doesn’t have any supernatural flicks in the works, but he is set to return to the DCEU as Batman for The Flash, which is set to release on November 4, 2022 across US and UK cinemas.

If you are looking for a caped crusader fix, why not check out our guide on how to watch the Batman movies.